Australia's Most Popular Chinese Language Course
Learn Anytime, Anywhere with with Our Downloadable Modulesemail me at: support @ learnmandarin.com.au
A Taste of Chinese Internet Lingo: What Does Soy Sauce Have to Do With It?
Post by Eva

Sometimes, no matter how good your Chinese is, you’ll hear words or phrases that make completely no sense. Even if you’re lucky enough to have a Chinese friend (or better yet, a teacher) to help you, their explanations might not necessarily make sense to you. Some words or phrases will seem simple, yet their meaning will be entirely different from what you expected, or even too complex for you to understand. Many of these strange  words were picked up by the Chinese netizens from the media (more often than not from a scandal) and spread all over the country.

Let me illustrate what I mean, one of the phrases that you might encounter is 打酱油 Dǎ JiàngYóu, “get the soy sauce”, which will be used as a commentary on a sensitive situation, kind of like “no comment”. Now, you might ask what does the soy sauce have to do with the commentary? 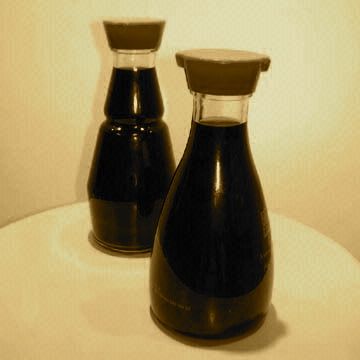 The basic meaning of the phrase originates in the daily life and habits of the Chinese people. In China, before it was packed in today’s glass bottles, soy sauce was sold in large refillable bottles. Obviously, there were special shops that sold soy sauce exclusively, and when you were out of soy sauce you would head there to 打酱油  “get the soy sauce”.

The phrase acquired a new meaning in 2007 with the 艳照 门( Yàn Zhào Mén) scandal when sensitive photographic material portraying the famous actor Chen Guanxi 陈冠希 (Chéng GuānXī) and his various plus-ones was leaked to the most influential Internet forum of the time, Tianya (www.tianya.cn). The juicy news story quickly progressed and spread to the mainstream media,  becoming one of the most important news in 2008.

The term itself was coined by a passer-by after being approached by the Cantonese TV station and asked to give his views on the matter, this was the answer: “关我无事, 我出来买酱油的” (Guān Wǒ WúShì, Wǒ ChūLái Mǎi JiàngYóu De)”. Translated into English: this thing doesn’t concern me, I’m just here to get (buy) soy sauce.

Since no one really does that anymore, this unlikely excuse was meant to express a sentiment of “I don’t want to be involved”, “I don’t wish to be dragged into this”, or, simply, “no comment”. This innocent-bystander stance has now been adopted by a wider audience and has become a phenomenon pertaining to the 酱油族 (JiàngYóu Zú) soy sauce crowd, a term used to describe people that don’t wish to be involved in the matter/conversation. “So, next time that somebody asks you about something you don’t really wish to get invlolved in, you can say: Don’t ask me, 我只是出来打酱油的!”