Australia's Most Popular Chinese Language Course
Learn Anytime, Anywhere with with Our Downloadable Modulesemail me at: support @ learnmandarin.com.au
American Dreams in China
Post by Eva

In my constant Sisyphean pursuit of trying to understand China and Chinese culture (中国文化 ZhōngGuó WénHuà) better, I’ve recently watched the movie American Dreams in China. Yes, there’s the American dream, but there’s also the Chinese dream, a concept recently introduced by the new Chinese leadership. Strolling around the streets of China you will thus find this slogan greeting you from just about everywhere: 中国梦，我的梦 (ZhōngGuó Mèng, Wǒ De Mèng) – ‘Chinese (China’s) Dream, My Dream’. Why not? 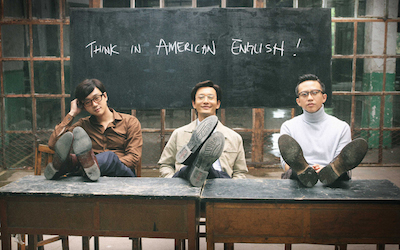 American dreams in China, is a mix of the two, and tells the success story behind the establishment of 新东方 (Xīn DōngFāng) ‘New Oriental School’, Beijing-based language school that specializes in preparation for GRE and TOEFL tests (and, consequently, migration to US). The movie revolves around three university students trying to find their way to US, and when failing to succeed over there, building an English-teaching empire back home in China. The three partners – the original name of the movie in Chinese is actually ‘The Chinese partners’ 中国合伙人 (ZhōngGuó HéHuǒRén) – each with their own wisdom and skill, soon make it from a make-shift factory-based classroom, to stadium lectures attended by thousands of students. One has lived in US, the other dated an American, the last is able to ‘recite’ the largest number of words in English (for many in China, a credible measurement of one’s level of English). The three friends reap enormous success though not with its toil on their friendship.

黄晓明 (Huáng XiǎoMíng) as Dong Cheng, the farmer boy turned geek turned  ruthless CEO; 邓超 (Dèng Chāo) as Xiaojun Meng is the wise of the three, the one who actually makes it to US, only to end up as a bus boy – 我在美国做什么，你知道吗？我连一个WAITER我都不是! (Do you know what I did in US, do you know? I wasn’t even a waiter!); and  佟大为 (Tóng DàWéi) as Yang Wang the hopeless romantic and Hollywood movie buff – there is a scene in the movie where he analyses the movie ‘Ghost’, resulting in the whole classroom practicing the famous: ‘I love you’ – ‘Ditto’ dialogue.

Although the director/producer Peter Chan Ho-sun brought out the big guns – all of the three leads are famous movie actors – the movie itself is unimpressive. I, for one, couldn’t understand why the actors themselves couldn’t get an English pronunciation course beforehand – their pronunciation is horrid (so is, consequently, a third of the movie). Nonetheless, the movie serves its purpose, giving you a peek inside the Chinese culture and their obsession with learning English, going abroad and making it big.

我们改变不了世界，是世界改变了我们。We cannot change the world, it’s the world that changes us.

你现在还是一个失败者吗? Are you still a loser?