Australia's Most Popular Chinese Language Course
Learn Anytime, Anywhere with with Our Downloadable Modulesemail me at: support @ learnmandarin.com.au
BaiJiu: Alcohol of Choice for Binge Drinking
Post by admin

The Chinese president to be is a fellow named Xi Jinping. His ascent to the top will come as a great gift to a little known Chinese alcohol company called China Xi Jiu, which has been producing BaiJiu (aka MaoTai). Why? Well, by a fortunate stroke of coincidence, the Chinese character for “Xi” in China Xi Jiu is the exact same one used for the surname of the president-in-waiting. Yep. China Xi Jiu’s stars must have really aligned for them.

So what is BaiJiu? Well it’s literally ‘White Alcohol’ which is the Chinese equivalent of vodka. It’s usually around 60% alcohol and made from rice (though there are variations). In China, it’s well known that BaiJiu greases the wheels of commerce and government — to put it nicely! (By the way, if you’re looking to buy presents for any Chinese friend, surprise them with some BaiJiu!) A friend of mine says, either you have ‘guanxi’ (i.e. you know someone important) or you have to be able to drink a lot. Otherwise, you don’t stand a chance in China.

Well, it’s probably not so depressing but it’s not far away from the truth either. Whether you’re dealing with government or business, there’s an expectation for you to drink — especially at business dinners. Do you know what we say for ‘Cheers’ in Chinese? It’s GanBei. That’s literally, ‘dry cup’. And they mean it!

In the elite echelons of China, you’ll find businessmen and senior government officials getting completely wasted from too much binge drinking (AKA GanBei). If you can handle this kind of drinking, then you’ll be treated like a king. But for the rest of us caught up in this kind of situation, it might be a good idea to come up with an excuse like ‘for health reasons’. Otherwise, the social pressure to drink can be very overwhelming. If you’ve been to a business banquet, then you know exactly what I’m talking about. A friend of mine visited China as part of a business trip (they do big business in China) and of course he was invited to a friendly dinner with business associates. 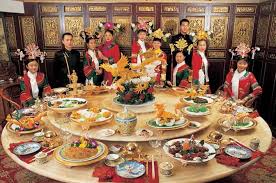 Once he started drinking, all of the others would egg him on to drink more. And more. And… more! You see, once you’re in, there’s no getting out. It’s better to establish that you’re not drinking at the start otherwise it can get pretty messy. My friend, realizing his predicament, decided to pretend that he was drinking. Each time someone screams GanBei!, everyone would clink their glasses and proceed to dry their cups. My friend though would empty the drink straight onto the carpet without anyone noticing… Smart, no? Believe it or not, he could’ve just delegated one of his company representatives to drink on his behalf — it’s perfectly acceptable!