Australia's Most Popular Chinese Language Course
Learn Anytime, Anywhere with with Our Downloadable Modulesemail me at: support @ learnmandarin.com.au
Beijing – The Northern Ruler
Post by Eva

It’s no secret, having lived both in Beijing and Shanghai, I do prefer the later one. Yes, Beijing is the cultural hub of China, with it’s lovely hutongs 胡同 (HúTòng) and tea houses and its superior fengshui 风水 (FēngShui), but Shanghai is the one that gets you easily spoiled with its international cuisines, shopping malls and just plain proper choice of anything (plus there is the fact that I find Beijing architecture rather intimidating).

But, in all fairness, Beijing is a great city, and it deserves, if not a semester, at least a decent lasting trip. Why?

Of course, there is the forbidden city 故宫 (GùGōng), which, as you might already know, is the largest palace in the world, its walls enclosing 980 buildings and totalling in nine thousand rooms (which is almost nine thousand more than I currently posses). The palace is well preserved and an impressive example of Chinese imperial architecture, and, especially if you are a fan of dragons, this is a place to go. 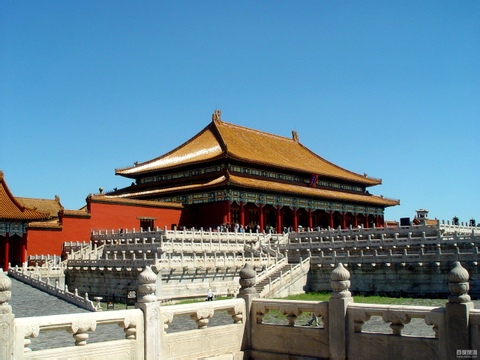 Right outside the forbidden city is the infamous Tianmen 天安门 (Tiān’ĀnMén) square, again topping the charts in the category of the largest public square in the world – hence good for roller skating and being targeted by the local scammers (be aware of the tea scam and the gallery scam).

Let’s do a couple more, summer palace is a huge, eight-centuries old garden well worth your visit, though, again, be careful of the illegal taxis 黑车 (HēiChē), since they can ‘take you for a ride’, coincidentally the longest and most expensive ride one of your life. Yes, due to its large number of tourist destinations, Beijing is riddled with tourists, and, of course, scammers.

Right, I almost forgot to mention the Great wall. Though it’s not exactly in the Beijing itself, you can easily access the closest part – Badaling 八达岭 (BāDáLǐng) – in just over an hour. But be ready to climb some serious stairs. The wall itself is massive and magnificent, though it cannot be seen space.

Although Beijing can hardly compare with Shanghai shopping-wise, Wangfujing 王府井 (WángFǔJǐng), Beijing’s most known (and most crowded) shopping street is packed with malls and department stores.

For those ready to withstand a couple of hours of unconventional sounds, you might find Beijing opera 京剧 (JīngJù) to be exactly what you were looking for. I would suggest that you take a local aficionado with you, though, otherwise you won’t be able to understand much – even a simple gesture of the wrist is full of symbolism. And if you want to save the money of buying the ticket, try visiting a local park or even a public square during one of the weekend mornings, chances are a local troupe (usually composed of retirees) will perform their own cover – and don’t worry being able to hear them well, they bring their own microphones and speakers too!