Australia's Most Popular Chinese Language Course
Learn Anytime, Anywhere with with Our Downloadable Modulesemail me at: support @ learnmandarin.com.au
Buddhism in China
Post by Eva

One of the world’s most prominent religions is Buddhism, based on the teachings of Sakayumi Buddha. With estimated number of adherents somewhere between 350 and 550 million, Buddhism is the 4th largest religion in the world, following Christianity (in all shapes and sizes), Island and Hinduism.

Originating in India, Buddhism was arrived to China more than two millennia ago. By the time it reached China, the original form of Buddhism separated into different sects, with each sect emphasizing a different teaching style. With time, these sects developed a completely different understanding about life, universe and everything, as well as their methods of attaining enlightenment. Though they differed in so many things, most of the sects agreed that we are to give up all earthly desires, take the strenuous path to truth in order to achieve eternal happiness, or Nirvana.

Those who are unable to achieve it are reincarnated and sent back to Earth to try again. The cycle continues until one is finally able to understand the meaning of it all and achieving enlightement. 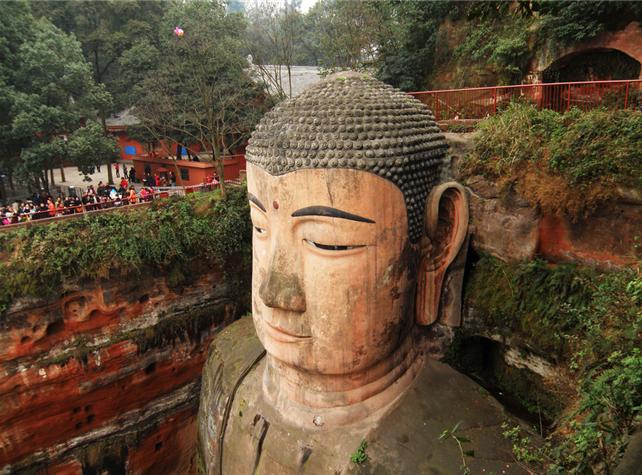 In the beginning, Buddhism did not play a big role in Chinese court, but that changed in A.D. 166, when the emperor Wen of Han dynasty 文皇帝 (Wén HuángDì) decided to built a statue of Buddha on the grounds of his palace. This same emperor went on to honor a Daoist deity, which has started the battle for the emperor’s attention that these two religions fought for the centuries to come.

For China, the most important form of Buddhism is called Mahayana, or Greater Vessel (aslo Greater Vehicle) sect. This sect revolves around the idea that all living creatures contain their own innate Buddha and enlightenment can only be achieved if a person is able to touch their innate character.

According to Mahayana Buddhism, there have been many Buddhas in the past and there are many more to come, with Buddha manifesting right now. There is also a number of Bodhisattvas or Buddhas-that-are-not-but -could-be, whose role is to teach others how to reach enlightenment.

One of the most popular figures in Chinese buddhism is Guanyin, the Boddhisatva of mercy and compassion. Although Guanyin was considered to be male, in Chinese art, it’s often portrayed as a female. This might have to do with Guanyin’s name which in Chinese could be translated “He hears the cries of the world,” and is a reference to the bodhisattva’s great compassion for humans.”

Around the world, we tend to be most familiar with a school of Buddhism called Zen Buddhism. Zen emerged from India and was popularized in China (in the 6 century) under the name of Chan Buddhism (禅 Chán). It gradually become popular in Japan as well, where it became known as Zen (Japanese reading of the Chinese character Chan) and from there on spread throughout the world.