Australia's Most Popular Chinese Language Course
Learn Anytime, Anywhere with with Our Downloadable Modulesemail me at: support @ learnmandarin.com.au
Have you ever tried calligraphy?
Post by Eva

If you’ve ever tried studying Chinese, I bet you have. I did, by my 师傅 (ShīFu, ‘master’) quickly started insisting that I retire all my hopes of achieving the mastery of it (or at least some rudimentary skills), deeming my pulse too unsteady, thus influencing my strokes and producing an erratic-looking, intelligible scripture of some sorts.

书法 (ShūFǎ, ‘calligraphy’) is the ancient art of writing and just one of those things that are so distinctively Chinese (though, of course, calligraphy can also be found in other languages, like Arabic). In its core it just means writing letters, poems and whathaveyous in an aesthetic way, but it’s much more than that. It is, as we’ve said, a form of art, or 艺术 (YìShù). Thus the symbolism of each stroke selected and the particular form used can convey strong emotions by themselves. 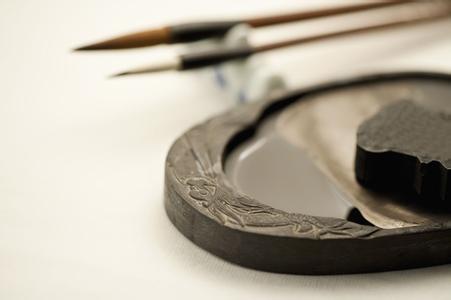 Chinese language is, of course, particularly well suited for calligraphy, given that the writing does not consist of letters, but of pictograms, or symbols – it is said that the earliest characters were actually stick-figure drawings (I don’t know where your mind goes here, but mine is definitely driven to XKCD). Over time then, the characters evolved (or devolved, if you want) into more simple, symbolic representations of objects, while even many more were combined with other characters to be able to form more complex ideas. Take for example the character 女 (Nǚ), which means ‘a woman’. When combining the said character with the character for ‘a child’, 子 (Zǐ) we get a new, complex character 好 (Hǎo), with the new meaning of ‘good’.

The strokes used to write, or rather paint each specific character can be thick or thin, depending on the style utilized.  In Chinese calligraphy, the aesthetic value of a painting derives from a combination of balance and beauty (although the meaning of ‘balance’ in Chinese culture is far from the meaning of symmetry – just think of the Chinese gardens). There was a time when calligraphy went hand in hand with poetry was was thus used by the educated elite to express their internal struggles or conflicting emotions.

The style called Kaishu 楷书 (KǎiShū), or regular script, became the number one style in Chinese calligraphy, from as early as 200 A.D. This style is still in use today, though its major drawback exists: using Kaishu it’s impossible to write quickly. This limitation was overcome by a new style called running script or 行书 (XíngShū), which combines the standard characters in a cursive, making the writing faster. This style is preferred for expressing personal feelings and is thus used for personal letters or manuscripts. Similar is 草书 (CǎoShū) or  cursive script (lit: grass script) which functions as a kind of shorthand – and don’t dream of understanding any bit of it if you’re not a calligraphy Shifu yourself.