Australia's Most Popular Chinese Language Course
Learn Anytime, Anywhere with with Our Downloadable Modulesemail me at: support @ learnmandarin.com.au
A word about Chinese martial arts
Post by Eva

Martial arts have a long history in China, with the first origins dating back to at least 2,000 years ago, to a time when China was dominated by warlords, bandits and foreign invaders. They can largely be divided into two forms: armed and unarmed arts. The former include disciplines such as spearmanship, archery and swordsmanship and the latter, which originated in China, focus on using feet for striking and hands for grappling.

In modern times some derivatives of the armed martial arts remain and are practiced as sports. Many of them come from the Japanese tradition, for example kendo (剑道 JiànDào – fencing) and kyudo (弓道 GōngDào – archery). In the unarmed category Japanese and Korean judo (柔道 RóuDào), sumo (相扑 XiàngPū), karate (空手道 KōngShǒuDào), taekwondo (跆拳道 TáiQuánDào) are popular today, some of them practiced as Olympics sports. Unarmed arts can be further categorised into self-defence forms such as aikido and hapkido(合气道 HéQìDào), and gong fu (功夫 GōngFu) – kung fu. All of these forms are summarised  under the Chinese name of Wushu (武术 WǔShù) or ‘boxing’.

Kung fu can be traced back to the Zhou dynasty (周代 ZhōuDài 1045-221 B.C.), while some sources state even earlier dates. It was first practice as a form of exercise by the Taoists around the fifth century B.C. Kung fu assumes very deliberate stances that are based on observations of human skeletal and muscular anatomy and physiology and require a great muscular coordination. Many movements in kung fu are based on the imitations of animals fighting (for example, here are stances called: dragon, frog, horse riding and snake).

There are hundreds of styles of kung fu, with both armed and unarmed techniques being developed through time. In the latter half of the 20. century kung fu has gone through a revival and has gained wider acceptance through he popularisation of new kung fu techniques and philosophies which were promoted mainly through Hong Kong movies.

Another ancient and distinctive Chinese form of exercise, as well as attack and defence technique is taijiaquan (太极拳 TàiJíQuán), or ‘the supreme ultimate fist’. Taijiquan is designed to provide relaxation through deliberate movements and coordination. The movements are founded on the principal of taiji (太极 TàiJí – the Supreme Ultimate), and, specifically, the complementary elements yin (阴 Yīn) and yang (阳 Yáng), which are known as passive and active principles. 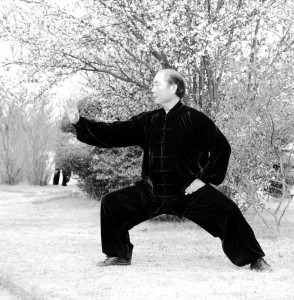 Taijiquan was used as exercise to promote health and has been practiced in China as early as the third century. By the fifth century, monks performed the exercises that was copying the movements of five creatures: bear, bird, deer, monkey and tiger. By the early Ming dynasty the yin and yang principles of harmony were added. Today taijiquan is still practiced by many people in China. Particularly during early mornings you can observe groups of people practicing their respective form in parks and courtyards. There are numerous schools of taijiquan, but five of them are the most popular. Depending on the school and the master, the number of exercise forms varies from 24 to 108. Taijiquan is a cousin of kung fu and is considered as a martial art. It may be used with or without weapons.