Australia's Most Popular Chinese Language Course
Learn Anytime, Anywhere with with Our Downloadable Modulesemail me at: support @ learnmandarin.com.au
Chinese New Year Series I
Post by Eva

We are approaching the Chinese Spring Festival (春节 ChūnJié) or the Chinese New Year. The coming year, celebrated on the 19th of February, will be the  year of the goat (羊 Yáng). 19th February must sound like an odd date to celebrate the beginning of something, but let’s see what are the reasons behind it. 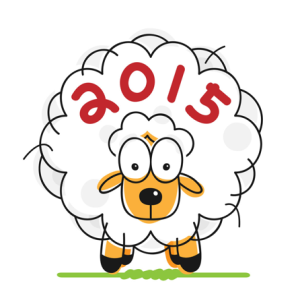 Chinese calendar (农历 NóngLì) is one of the oldest calendars in the world and is still in use today. The first origins of the calendar date back to the Shang dynasty ( 商代 ShāngDài) from around 14 century BC), although due to the lack of evidence this is still more in the realms of a legend than true fact. The first known almanac dates back to the era between 700 and 300 BC. At the time it was only a simple farming calendar, which, over time, was complemented with additional facts such as the number of days in each month and he number of months in a year.

At some point, the Chinese astronomers were commissioned to create a calendar which had calendar months based on the cycle of the moon, additionally, a year would consist of a number of full months and the calendar would also reflect the changing seasons. On top of that, it was their job to describe the movement of all visible planets and to predict the next lunar and solar eclipses. In order to do that, they first had to optimise their astronomical calculations. But why was so much importance given to the astronomers from the start? And why was making this calendar such an important task?

The astronomers always played an important role in the Chinese court. Some experts say that, quite naturally, this is due to the fact that agriculture has always played a major role in Chinese economy. Naturally, in hopes of a successful harvest, one firstly had to be knowledgable about the right planting seasons. Other experts argue that this is actually of marginal importance, since the climate of the enormous China differs greatly from region to region, thus a single planting calendar could not include them all at the same time.

For this reason many experts believe that the true reason why a calendar was of such crucial importance lies in the belief of the mandate of heaven (天命 TiānMìng). This is an ancient belief that meant that the emperor acted as a connector between the Earth (土 Tǔ ) and the Heaven (天 Tiān). He was supposed to rule justly and kindly, otherwise the nature would revolt, resulting in natural disaster ,which, in turn would bring the dissatisfaction of his people and a drastic change at the top (a new dynastic cycle).

For this reason, emperors and their advisers believed that any and all changes in the nature, could be considered as clues from heaven.  Once it was possible to predict some of these natural events such as solar and lunar eclipses, the role of the Emperor as a heavenly messenger diminished, but, on the other side, the notion of an emperor as a mystic force was exaggerated if they were able to predict such events correctly.