In our previous post we already discussed such esoteric terms as heavenly stems and terrestrial branches, but I am afraid there is more to come. In order to understand the many roles that the traditional calendar has in China, as well as understand the rules that govern how the calendar is set up, we will also discuss something called the solar terms (节气 JiéQi). 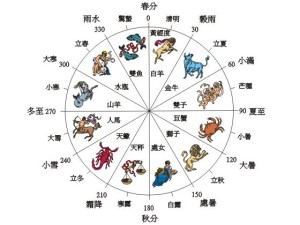 Let’s start with the basics. If you happen to live in the northern hemisphere you will know that one can observe the following journey of the sun: during the Winter Solstice (冬至 DōngZhì) the sun comes up relatively late on the southeast, at noon it’s rather low on the south and pretty soon it sets on the southwest. With time, the days grow longer, and the sunsets gradually moves more towards the north. During the Summer Solstice (夏至 XiàZhì) the day is the longest, the sun is the highest, it rises on the northeast and it sets on the northwest. After the Summer Solstice the days become shorter again, until the circle is connected again in the Winter Solstice.

Besides the two solstices there are two other important points observed in the journey of the Sun. These are the Spring Equinox (春分 ChūnFēn) and the Autumnal Equinox (秋分 QiūFēn) – four solar terms done, twenty more to go. In these two points the sun crosses the equator. If you were observing them from the northern hemisphere you would see the sun rising exactly on the east and setting exactly on the west. In other words, it spends twelve hours above the horizon and another twelve below it.

During Han dynasty it was believed that the Sun needs four equally long periods in order to cross these four points. Each quarter was thus further divided into six more, which resulted in 24 solar terms.

The main purpose of the solar terms is to act as checkpoints that measure whether the lunar months are still running along with the seasons. Since a years hold twelve months and there are 24 solar terms in total, it follows that each month would have two solar terms.

Once the length of a tropical year was defined, or, in other words, once it was known how long the solar journey takes, it was simple enough to measure where the solar terms would fall.

Each solar term signifies a change in the nature and is meant as a farming guide. Of course, the two solstices and the two equinoxes come from astronomy, but many other are of more practical nature. The second term, 雨水 (YǔShuǐ) signifies changes in rainfall, while the 20th term 小雪 (XiǎoXuě) foretells light snow. Some other solar terms indicate changes in the environment: the third solar term 惊蛰 (JīngZhé) signifies waking insects and the 9th solar term 芒种 (MángZhòng) indicates the ripe grain.