Australia's Most Popular Chinese Language Course
Learn Anytime, Anywhere with with Our Downloadable Modulesemail me at: support @ learnmandarin.com.au
Chinese TV-Shows: Papa, Where Are We Going?
Post by Eva

Suddenly, being a dad in China is very cool. Just today I was greeted by an add featuring a hunky looking fella that was equipped with diapers, pacifiers, and other necessary equipment (from the looks of the crying child still rather unsuccessfully) taking care of his kid. The ad was for an online supermarket, the kind where you can buy everything and have it delivered to your doorstep, like, yesterday.

The sudden surge in fatherhood status must, in part, be due to the popularity of the Reality TV Show (真人秀节目 ZhēnRén Xiù JiéMù – lit. “real people’s show program”), Papa, Where Are We Going 爸爸去哪儿 (BàBa Qù Nǎr). The originally Korean plot is rather simple: a group of five celebrity dads, along with their offspring, will be taken to a remote area – no moms allowed – to singlehandedly take care of them for a period of 72 hours. There, they will have to display their parenthood skills ranging from cooking, changing clothes, washing and just generally cooing (begging) the child to do what he/she is told to do. I don’t want to be too much of a spoiler here, but to give you a rough idea of the series, here is the summary from episode one. 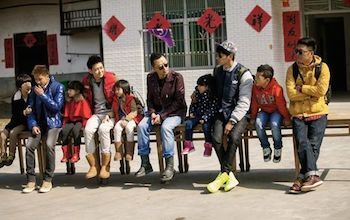 The five parents and their children (aged 4-6 years old) set off to a remote, rural area. Due to the celebrity status and the busy lifestyle of their dads (爸爸 BàBa), this is the first time that they will be travelling with the child alone 第一次只有爸爸旅行 (Dì Yī Cì ZhǐYǒu BàBa LǚXíng). Upon they arrival, they are immediately faced with the first challenge: children should be separated from their snacks (零食 LíngShí) and their toys (玩具 WánJù). Following the cries of despair and misery, the families are then shown around the five available residences. Not all the ‘guest houses’ are the same, one, for example, doesn’t have a toilet, the other currently inhabited by a giant hairy spider (蜘蛛ZhīZhū) – presumably dead, but, nevertheless, scary. The children are then responsible for drawing (抽签 ChōuQiān) the lucky room numbers. Crying, again, ensues from the “losers”.

Challenge upon a challenge, fathers are left dealing with their crying, enraged, or otherwise excited children, displaying their particular parenting skills (or lack of them). Besides from offering a peek in the lifestyle of the Chinese rich and famous, the series also showcases the “less family oriented, more individualistic and westernized” lifestyle of the post 80s generation 80后 (80Hòu).