Australia's Most Popular Chinese Language Course
Learn Anytime, Anywhere with with Our Downloadable Modulesemail me at: support @ learnmandarin.com.au
Coffee or Tea?
Post by Eva

Although tea has traditionally been the drink of choice for most of Chinese, China has seen more and more coffee drinkers in the past few years. Nowadays, it seems, any respectable city corner and shopping plaza has to be adorned by a Starbucks, Costa Coffee, Pacific Coffee Company or Coffee Bean store.

Starbucks is definitely the most successful among them and is especially popular among the  young, working crowd as a venue for dating, holding a business meeting, and anything between those two (my favorite are the old taitais that convene there on weekend mornings – boy, oh boy, they do have a lot to share). Not surprisingly, Starbucks is also a point of refuge for many a foreigner; I must admit myself that during my rookie days when I wasn’t yet confident enough to actually speak Chinese, seeing a Starbucks was usually accompanied by a sense of relief (kind of like sailors seeing land after a long time).

Another reason for Starbucks being the most popular coffee destinations must lie in the fact that they did a pretty good job in adapting to the Chinese market and taste: long live green-tea flavored coffee! 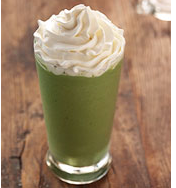 My theory is, though, that it isn’t not the taste of the coffee per se that makes people drink it here in China. The reason why especially younger generations choose it instead of drinking tea is that drinking coffee also means that: a) you are fashionable (go team USA!); b) you have a buck or two to spare (yes, Starbucks is also pricy here with the small (tall) drink averaging around 5 dollars); c) you know how to enjoy life (Starbucks or other coffee shops are usually cleaner, brighter, quieter, more romantic) than their tea counterparts which come with smoking and shouting galore); d) you are way cooler than your tea-drinking parents.

Coffee machines are also popping up in Chinese companies – I guess the management, like everywhere else –  is recognizing  its value in fighting the afternoon fatigue. There also numerous instant versions available offering the standard cappuccino and latte but also more sweet-based mocha and vanilla beverages.

The good news, dear foreigner is, that now you have a choice; the bad news is that a cup coffee will usually cost you an arm and a leg (and possibly a kidney).