Australia's Most Popular Chinese Language Course
Learn Anytime, Anywhere with with Our Downloadable Modulesemail me at: support @ learnmandarin.com.au
Confucius and Confucianism
Post by Eva

Have you  heard of Confucius yet? I bet you have. Confucius, or 孔子  (KǒngZǐ) is an ancient Chinese philosopher responsible for shaping many concepts and values still present in the Chinese society nowadays.

Confucius lived during the period of Chinese history known as the Spring and Autumn Period (春秋时代 ChūnQiū ShíDài) that lasted from 777 B.C – 476 B.C. During this romantic-sounding era, Chinese philosophy and didactics prospered with sages like Confucius, as well as others. Among those were the founder of Daoism, Laozi (老子 Lạ̌o Zǐ ), Mengzi (孟子 Mèng Zǐ), Zhuangzi (庄子 Zhuāngzǐ) – as I’m sure you have by now deducted, 子 (Zǐ) means “master” – all of them reponsible for the intelectually fruitful era now know as “the Hundreds Schools of Thought” (诸子百家 ZhūZǐBǎiJiā). 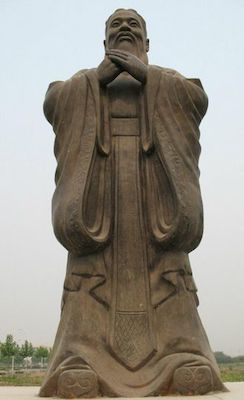 Although it is hard to prove that there really was a hundred of them (mostly because few of the schools survived the book-burning and general aversion to anything but legalist during the Qin dynasty – 秦朝 Qín Cháo 221-206 B.C.), nine of those became the most important.

Among those 儒家 (RúJiā) – the school derived from Confucius’s ideas was the one to leave the most important mark in Chinese society. Ttwo other very important schools were Daoism (道家 DàoJiā) and Legalism (法家 FǎJia) –  the later, as we’ve mentioned becoming the official doctrine during Qin dynasty (the dynasty during which China was united for the first time).

But going back to the Spring and Autumn period, during those days important concepts of morality and ethics were developed which became cornerstones of Chinese philosophy and culture. Among those were concepts such as the complementary opposing forces Yin and Yang (阴 Yīn and 阳 Yáng), “the way” Tao (道 Dào), filial piety Xiao (孝 Xiào) and many others.

Confucius himself was a social philosopher which means that he aspired to develop a system of ideas which would more efficiently (and more fairly) govern the society and people living in it. He thus developed a code and ways of behaving that he deemed necessary for the society to flourish. We will talk about those codes of behaviour pertaining to the behaviour of common people in our future blogs, today we will just mention a code concerned with the Emperor. Confucianism developed the idea of the “Mandate of Heaven” or the right to rule called 天命 TiānMìng.

Tianming dictated that a ruler was chosen by heaven/destiny 天 Tiān and that as long as the leader was just and fair the heaven would support him. Once the Emperor wasn’t working for the benefit of the people anymore, he would lose his mandate and would be overthrown. The indicators of such mandate lost were usually sourced in nature, or, more specifically, natural  disasters such as floods, droughts or earthquakes. These would indicate that the Heaven was displeased with the ruler or the dynasty and future leaders would thus justify their attack on the throne.

And how did Confucianism affect the lives of common people? Follow our blog to learn more.