Australia's Most Popular Chinese Language Course
Learn Anytime, Anywhere with with Our Downloadable Modulesemail me at: support @ learnmandarin.com.au
Driving in China: Do you Dare?
Post by Eva

I recently read an article that said that the Chinese government is going to make the process of obtaining a driver’s license easier and more convenient for the Chinese citizens. I must admit that my first reaction after reading that, was that of fear.

Let me explain this to those of you who haven’t been to China yet. Traffic in China is bad; driving in China is hectic, aggressive and dangerous. Whomever told you that China is a land of passive, buddhist-like people lied to you – this will be clear to you within the first five seconds you spend on Chinese roads. 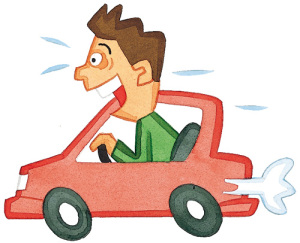 Car ownership was uncommon in China until the 1990s when the automobile boom made it possible to buy cars that were more affordable. Today, owning a car is a status symbol and a must have for anyone who considers himself successful. According to China Association of Automobile manufacturers, about 23 million vehicles will be sold this year.

With the number of cars increased drastically, so did the number of inexperienced and unprepared drivers, and of course, the number of car accidents. According to World Bank data, China is currently no. 120 in the category of road safety, with more than 280,000 people dying in traffic accidents in just the year 2010.

Chinese drivers are known to be fast and aggressive. What that means in practical terms is this: little or no regard for traffic rules (e.g. one-way streets), hardly any courtesy to other drivers – don’t expect any favors or consideration from other drivers; and mindless speeding and breaking at all possible times. Also, honking is the norm (even in a residential area at 3am in the morning). Add to that the infamous Chinese intolerance to alcohol, but mixed with a general sense of pride and the omnipresent desire to protect one’s mianzi (面子). You’ve guessed it, drunk driving is a big part of the problem and it’s nowhere close to being stopped.

Admittedly, it’s not just the cars that should be blamed for all those accidents. It’s also the huge number of bicycles, pedestrians, tricycles with those gigantic loads and, especially, the silent killers – electric motorcycles.  For some reason, you will find that the smaller the city is, the less likely someone  is to wear a helmet.

Expats in China tend to be apprehensive about the subject of driving. Especially if you live in large city, you might find it more convenient to use public transport, taxis or even renting a car with a driver. Driving a car is definitely more useful for those living in remote areas with a long everyday commute. Yes, the three-wheelers might save you often enough, but especially in the winter, you might not want to do that.

For foreigners, it’s not easy to get the Chinese licence (the International Driving Permit is now valid in Mainland China). To get it, the foreigners are first expected to pass a computerized theory test of 100 out of over 900 multiple choice questions with 90% as a pass mark.

There are two main reasons why you might struggle with the questions: firstly, the test questions are based on memorization of strange and often useless facts; secondly, even if the tests are offered in English and other languages – in Shanghai, you can take it in English, Russian, Japanese, Korean, Italian, German, French, Spanish and Arabic – the translations are usually far from perfect.

To top it up, getting a license plate in China may prove impossible, for foreigners and Chinese alike. So consider yourself warned!