Australia's Most Popular Chinese Language Course
Learn Anytime, Anywhere with with Our Downloadable Modulesemail me at: support @ learnmandarin.com.au
Green dumplings?
Post by Eva

This post is intended for two groups of readers: people living in China who have been baffled by the green dumplings now adorning counters of every convenience store, and secondly, people who just want to know more about Chinese dumplings and are not entirely sure whether green is the way to go. 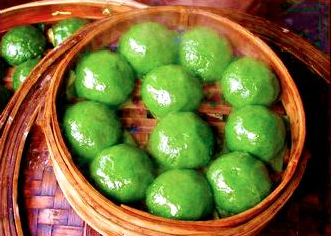 青团 (Qīng Tuán) are green dumplings that got their color from the main ingredient which is 艾草 (ÀiCǎo) or Chinese mugwort. Glutinous rice is added to the mugwort, the dumpling is steamed and voila! Recently, the mugwort recipe has been replaced by artificial dye – now transforming the originally dark-green dumpling into a shinier, even more noticeable version.

Why are these dumplings so ready available now, you might ask? Well, traditionally, this season was chosen because the said mugwort is harvested these days, and also people buy them for the holiday known as the Tomb Sweeping festival or 清明节 (QīngMíngJié). Notice the Qing in both of the words?

The Tomb Sweeping festival is one of the 24 “solar terms” in China, which takes place fifteen days after the spring equinox. In olden times, the solar terms were used to indicate the differences in temperature and precipitation, and were thus largely used for agricultural purposes. It is said that after the Qing Ming festival temperatures will increase, so will the amount of rain, making this the ideal season for plowing and planting. The festival falls between the forth and sixth day of the fourth month, according to the traditional Chinese calendar 农历 (NóngLì). This year, the Tomb Sweeping festival will be celebrated during April 5-7.

Aside from acting as a planting calendar of the sorts, there are other customs associated with this holiday. Nowadays this holiday is used to commemorate one’s ancestors and accordingly sweep the tombs – a tradition observed by the majority of Han and numerous other minorities. Family members equipped with their ancestors’ favorite drinks, fruits and dishes, as well as a stack of fake paper money, head to their family’s grave. Once there, they should place the drinks and the dishes in front of the grave, burn the money and bow in front of the grave. Since nothing (except for the burnt paper) should go to waste, they are then allowed to drink and eat the foods prepared and go back home with the sense of a job well done.

Going back to the Qing dumplings, these should be enjoyed in the days before the Tomb Sweeping festival, essentially to lead in to the family reunion 团队 (TuánDuì).  Tuán means “to assemble”, “to unite” in this case, one’s family (observe the 团 character present in Qīng Tuán). It is an opportunity for families to come together to tidy the ancestral graves, pay respects, and share meals together.