Australia's Most Popular Chinese Language Course
Learn Anytime, Anywhere with with Our Downloadable Modulesemail me at: support @ learnmandarin.com.au
I speak Chinese. But which?
Post by Eva

I am sure that all of our readers are already aware of the fact that the term ‘Chinese’ (language) refers to more than one variant of the language. Usually, people refer to standard Chinese 普通话 (PǔTōngHuà), also known as Mandarin Chinese, which is the official language in Mainland China and Taiwan, is one of four official languages in Singapore, and is widely spoken in many areas around the world.

Even though Mandarin Chinese is the official language, many people prefer to communicate in their dialect of choice and one can imagine that in the vast and highly populated China there are many dialects to choose from. Dialects (方言 FāngYán) are divided into groups of dialects, such as Shanghainese (from Shanghai), Hakka language (spoken in Taiwan), Minan language (spoken in Fujian) and so on. But let’s also not forget about Cantonese ( 广州话 GuǎngZhōuHuà), a major dialect of Chinese spoken today in Guangdong province, in Hong Kong and Macau. 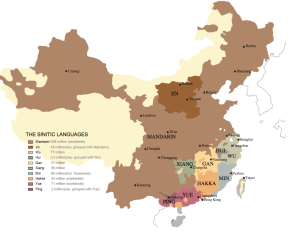 From: Language Atlas of China

To speakers of a certain dialect, representatives of other dialects would sound intelligible. If a Cantonese merchant was to try and speak to a Shanghainese lady in her native dialect, chances are they wouldn’t be able to understand one another. Differences between the Chinese dialects are thus big and perhaps even bigger than the differences between different European languages that belong to the same language group (like German and English, or, Spanish and French).

Then why not call it a different language altogether? Aha, here is where Chinese characters come into play. Going back to our imaginary scenario of a Cantonese speaking merchant trying to talk to a Shanghainese lady, even though they wouldn’t be able to understand one another, they would be able to communicate in written word. All the different dialects use the same Chinese script, the difference, of course, being in the pronunciation (but the meaning of characters generally remains the same).

The biggest difference between Cantonese and Mandarin lies in the pronunciation of words. Then there is also the different numbers of tones, of which Mandarin has four and Cantonese nine. There are also notable differences in idiomatic expressions and slang. Both  Mandarin and Cantonese (even though they are usually grouped under ‘Chinese language’) are major minority languages spoken throughout Singapore, Malaysia, Indonesia, Australia, New Zealand, Thailand, Philippines.

With Cantonese being so different from Mandarin Chinese, many people will readily argue that Cantonese should exist as an independent language and not just as a dialect. The fact that it can act as an official language would support that. Still, many more – especially opinionated on this subject tend to be patriotic Chinese from Mainland China – would not agree. In any case, to describe the exact relationship between Mandarin and Cantonese would be too ambitious of a task, but many linguists seem to agree that the categorisation of Cantonese as a dialect only has been made purely for political reasons.

Most affected by all this are, of course, the citizens of Guangzhou and Hong Kong where people are instructed that: ‘civilized people speak Mandarin’  (文明人説普通話 WénMíng Rén Shuō PǔtōnghHuà). Despite that, the locals continue to use Cantonese, establishing a difference in use of 白話文 (BáiHuàWén) and 口語 (KǒuYǔ). The formal is the written language or Standard Mandarin, the latter is the spoken language or Cantonese. These two are considered as two entirely different matters (两码事 Liǎng Mǎ Shì) and most of the people are completely able to switch between them naturally.