Australia's Most Popular Chinese Language Course
Learn Anytime, Anywhere with with Our Downloadable Modulesemail me at: support @ learnmandarin.com.au
Let’s Talk about Chinese Cinema
Post by Eva

The majority of movies featured here were created by one of the members of the so-called fifth generation of Chinese movie directors. The five generations correspond to historical periods: silent films; first sound films during the 1920s and 1930s; films from 1949 through the Cultural Revolution; films after the Cultural Revolution; and the fifth generation, films made by graduates of the Beijing Film Academy in the 1980s and 1990s (the Academy re-opened its doors in 1978).

The members of the fifth generations were marked by the Cultural Revolution, with some of them working on the countryside, or as soldiers. After the end of the revolution they were formally trained and set off to portray China’s turmoils and struggles on the screen. Their films tend to be subjective, symbolic and powerful. The main representatives of the generation are Zhang Yimou, Chen Kaige and Tian Zhuangzhuang. Critical of the Chinese government, a number of the movies were originally banned and only latter released to the general public.

Perhaps the most famous of the group is Zhang Yimou (张艺谋 Zhāng YìMóu). Mr Zhang is famous for his portrayal of Chinese people and their silence in the face of adversity. In his earlier works in particular, he tends to be critical of the past feudal system, the abuse of power and corruption. While earlier movies achieved wide critical acclaim, his more recent costume dramas have seen a noteworthy international success. Zhang Yimou is also famous for his collaboration with the actress Gong Li (巩俐), who stars in a number of his movies. 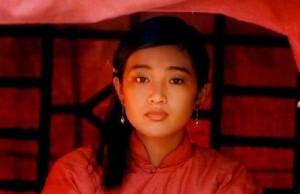 Mr Chen is most famous for his movie Farewell My Concubine (1993)  – 霸王别姬 (BàWáng Bié Jī) –  the only Chinese-language movie to have won the Palme d’Or at Cannes. The film portrays the life of two stars of Beijing Opera affected by the political turmoil of  the mid-20th century China.

The Blue Kite (1993) – 蓝风筝 ( Lán FēngZheng) – like many other movies of the 5th generation portrays the lives of ordinary people and how they were affected by the Cultural Revolution.

Jiang Wen (姜文 Jiāng Wén) is a member of the sixth generation – or the post-5th generation – of Chinese directors. He started as an actor, with favourable reviews for for his lead role in Zhang Yimou’s Red Sorghum. Today Jiang Wen is one of the most successful directors in China.

His debut was the movie Heat of the Sun (1994) – 阳光灿烂的日子 (YángGuāngCànLàn De RìZi). His most famous work is the black comedy Devils on the Doorstep (2000) – 鬼子来了 GuǐZi LáiLe – which was co-written and produced by Jiang Wen and starring Jiang himself. It’s shot in black and white to mimic the old wartime movies and tells the story of a Chinese village in the last years of the Second Sino-Japanese war.