Australia's Most Popular Chinese Language Course
Learn Anytime, Anywhere with with Our Downloadable Modulesemail me at: support @ learnmandarin.com.au
Let’s Talk about Chinese Food
Post by Eva

If loves goes through the stomach, then certainly, the way to loving (and knowing) China is through Chinese cuisine. But, “it’s complicated”:

Food has always played an important role in China (and let’s be honest, food plays an important role everywhere, but after answering to 你吃饭了吗 for the umpteenth time, you might agree that it has a special status in the Chinese culture). For example, in the olden times, one of the most important responsibilities of the court and the emperor in particular, was to organize the ceremonies (praying to ancestors, praying for bumper crops, the usual). The emperor would thus appoint a court chef, and this chef would play a major role in all the court rituals. After preparing the food, the food would be placed in front of the altars so that the ancestors could feast in the smells, afterwards, the court guests would finish the job.

Supposedly, one of the pickiest eaters in ancient China was the ancient sage, Confucius. His attitude is roughly summarized in the Analects: “He did not dislike to have his rice finely cleaned ; he did not eat rice which had been injured by heat or damp and turned sour; he did not eat what was colored, or what was of a bad flavor.” In Chinese you would say, 他很讲究 ( JiǎngJiu) He knows what he’s talking about (although it might just seem like he was trying to avoid an upset tummy).

Anyway, speaking of rice, the Chinese have always pursued a balance between the rice 饭 Fàn and the dishes 菜 Cài. This means that the right amount of veggies, meat, cold dishes, hot dished, savory and sweet food should be enjoyed with every meal. This practice is still observed by many a household, and you can observe it the next time you attend a dinner banquet (wedding reception, annual dinner etc).

There are several major schools of Chinese food (we’ll talk about those in the future), but in general, rice is the staple in the Chinese South, while wheat flour (noodles, dumplings) are consumed in the North. Fish is popular everywhere, since it’s symbolizes prosperity (see 鱼Yú fish and 裕 Yù prosperity). Among meats, pork, chicken and duck are very popular; and so are many kinds of mushrooms (my favorite by far is the needle mushrooms: 金针菇  JīnZhēnGu). 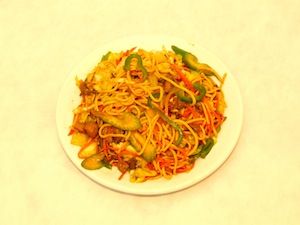 The turning point that makes me change from “Chinese food is very healthy” to “not so”, is the the widespread usage of  MSG (monosodium glutamate) instead of salt (and I’m not just talking about your insanely cheap fried noodles and instant noodles, I mean, it’s everywhere). Together a with really generous use of (animal) fat, this sometimes makes the Chinese food taste still delicious, but kind of oily and artificial.