Australia's Most Popular Chinese Language Course
Learn Anytime, Anywhere with with Our Downloadable Modulesemail me at: support @ learnmandarin.com.au
Let’s Talk About Jiaozi
Post by Eva

It is said that culturally, China is divided into Northern and Southern China; there are also other differences: sense of humor, people’s character (hard in the North, and soft in the South); the fact that the North enjoys central heating throughout the winter (while we are stuck with a dry (useless) A/C here, South of of Yangtze river), and culinary, North is all about noodles and jiaozi, and South is all about rice. 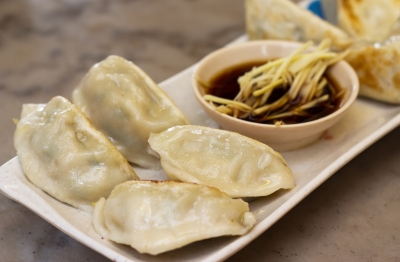 饺子 JiǎoZi 水饺 ShuǐJiǎo are Chinese dumplings with meat and/or vegetable stuffing. The catch is in the stuffing – every Chinese MāMa insists their recipe is the best, but stick to DongBěi (Northeast region) chefs, they are renown for the best jiaozi out there (and those Northernness do give mean portions).   These savory dumplings are boiled, and then dipped into a vinegar+garlic (+ optional soy sauce) before eaten – no one tells you that, but believe me, you’ll look like a complete rookie if you skip the dipping.

There is a wide variety of dumplings out there, but perhaps the most dominating flavors are:

Although a common meal (for the Northerners), jiaozi are also traditionally eaten for Spring Festival. The reason has nothing to do with the taste, and has everything to do with how jiaozi ‘sound like’:  饺子 JiǎoZi (kinda a) sounds like 交子 Jiāo Zǐ or ‘the juncture between the old and the new year’. Bear with me: Jiāo means “to join” and Zǐ means the time between 11pm and 1am (way way back in China, a day would be divided into 12 subsections, each lasting 2 hours, and each having its own name).

Well there you go, be sure to taste some at the upcoming Spring Festival!