Australia's Most Popular Chinese Language Course
Learn Anytime, Anywhere with with Our Downloadable Modulesemail me at: support @ learnmandarin.com.au
Matchmaker, Matchmaker, Make me a match
Post by Eva

As we are approaching the Spring Festival, many young Chinese are dreading their visit home. The long travel, the rigid traditions with no room for rest and, of course, all the nosy personal questions that one would rather avoid. Particularly afflicted are single women over the age of thirty. Though they might be successful in their professional field, these women are usually seen as failures by their family members.

Although the status of women is changing (improving) day by day, China is still largely a patriarchal society. Nowhere else is this more evident than in the Chinese countryside, where the main responsibility of women remains in taking care of the children (and giving birth to a son, or even better, sons).

These days, even women in professional circles do not have it easy. Particularly hard have it those who find themselves at the top – CEOs, founders and scientists – since they cannot find a man brave enough to marry them. In Chinese tradition it is believed that the man should be stronger than the women in all aspects – particularly in earnings and education. 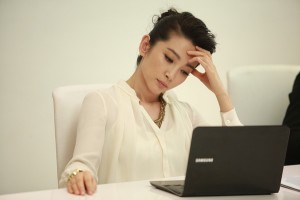 A popular theory tries to explain this phenomenon as follows: imagine that the whole Chinese population could be divided into classed A to D, A being the class of the highest ‘quality’, D, the one with the lowest. The social rules govern that the A-class man should marry a B-class woman. Similarly, B-class man will marry a C-class woman and a C-class man will go on to marry the D-class woman. It is the A-class women and D-class men that have it the hardest.

When I was living in Shanghai,  I had a female friend who was engaged. An M.A. herself she was very keen on marrying her high-school sweetheart, but he refused to do so until he finished his master’s studies himself so that, if not superior, he would be at least of equal rank. Another problem arose when the said friend was offered a position in a multi-national company, while her husband-to-be was only employed in a modestly successful Japanese company. Ridden by worries (she was making much more money than he was), he decided to look for another job, thus postponing the wedding day even further. My friend was starting to get nervous for she was nearing her 30th birthday, something she was daily reminded off by her mother. Clever as she was, she found and ingenious way of convincing her boyfriend to marry her: she convinced her wealthy uncle to pay for all the wedding costs (including a lavish wedding ceremony that was taking place on the Huangpu river cruise).

Recently, a new term has been coined to describe urban professional women over the age of 27. The term – allegedly coined by the editor-in-chief of the Cosmopolitan magazine China – is called 剩女 (ShèngNǚ) or left-over woman. It derives from words 剩饭 (ShèngFàn)and 剩菜 (ShèngCài), both meaning ‘left-over food’. So widespread is this phenomenon that, tragically enough, the term was officially adopted by the Ministry of education in 2007.

This, of course, is a strictly negative term and the Chinese women decided to fight it back. Taking the opportunity for some world play, these ‘feminists’ coined another term called 胜女 (ShèngNǚ), or ‘victorious women’.