Australia's Most Popular Chinese Language Course
Learn Anytime, Anywhere with with Our Downloadable Modulesemail me at: support @ learnmandarin.com.au
Monkey King
Post by Eva

If you were to turn on the TV in China at any point during the day, you’d be likely to encounter this image: a monk, a monkey, a pig and a bearded fella walking down a swamp. Sounds like the beginning of a bad joke, but let’s go a step further by asking: who is this monkey and why does it deserve to be called a king?

Monkey King, also known as 孙悟空 (Sūn WùKōng) is a mythological creature and the main hero of many a folk tale. During the creation of time, Sun Wukong was born from a stone egg (thus the origins of one of his nicknames Stone Monkey). Back then, this monkey was what it was supposed to be – a monkey. But as time passed and the monkey became more powerful and knowledgeable he began to assume a more human look (Dragon Ball, anyone?).

Fact: Monkey King was able to transform into 72 different forms, e.g. a tree, a bird and an insect 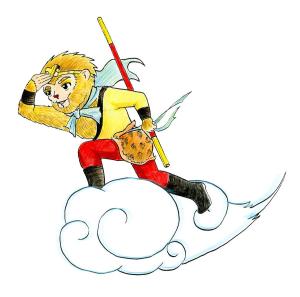 Among one of his many talents was shapeshifting –  he is a also known as a trickster (tricksters specialize in tricking humans and other creatures and often take the shape of an animal). These abilities enabled him to rule his monkey kingdom – the exact details are unknown, but he obtained his title during a dare.

Human in both his looks and ways, Monkey King was greedy, obsessed with food and drinking wine. More often than not this resulted in trouble and chaos and so Sun Wukong went on to commit many a naughty deed, among those were: crossing his name from the list of the dead, stealing a magic weapon from the Dragon King, as well as using the said weapon to fend off the spirits who came from hell to claim his soul.

A source of many complaints, Sun Wukong came into trouble with Jade Emperor (yes, the Jade Emperor), who decided Monkey King should be pulled back to heaven (one could be given a worse punishment, I think). But listen, there is more. Sun Wukong was not to be caught and he went on to commit many other mischievous deeds before drinking the elixir of eternal life.  At some point he even angried Buddha himself which sent him to lock-up for 500 years.

It was when Sun Wukong was approaching his release that the monk 玄奘 XuánZàng (602-664) was sent to India to obtain the Buddhist sutras. Since they voyage- made entirely on foot – was dangerous,  Buddha was asked to help with the security details. Buddha decided that Monkey King should do, so Sun Wukong was released on parole to act as a guide and protector to the monk.

They were joined by Pigsy, a.k.a 猪八戒 ZhūBāJiè part-human and part-pig with a twist of greedy and lazy, and Sandy (沙悟净 ShāWùJìng), the red-bearded monk. The party of four – and it indeed sounded like a party – set to India via Adventureland.

Fact: Using clouds as means of transportation, Sun Wukong could travel 108,000 miles (at least) with just a single somersault. Beat that Chuck Norris.

Some legends say that in return for his service Xuanzang taught Monkey King how to achieve immortality and also gave him the name Sun Wukong, which can be translated as ‘enlightened monkey’. When Xuan Zang returned back to China he translated the sutras into Chinese setting up the foundations for the development of Buddhism in China. While the monk Xuan Zang was a real figure, it is indeed highly unlikely that his companions would be a talking pig and monkey. Nevertheless, the fictionalized version is presented in the classic novel Journey to the West (西游记 Xī Yóu Jì), which was completed in the 16. century.