Australia's Most Popular Chinese Language Course
Learn Anytime, Anywhere with with Our Downloadable Modulesemail me at: support @ learnmandarin.com.au
Online Chinese dictionary: finding the right one
Post by Eva

For the past couple of months Chinese learners throughout the world have been mourning the death of one of the most used and loved online Chinese dictionaries (did I mention it was free?) by the name of Nciku. Yes, for a couple of months before being shut down the site has been acting up,  yes, it sometimes took forever to load (or it didn’t load at all), but its handy handwriting and stroke order functions, traditional character lookup, as well as looking up character variants – pronunciation and/or usage –  Chinese definitions, English translations, example sentences and collocations – all that one place – will surely be missed.

Of course, as a serious student of Chinese yourself, you will need to pull yourself together and look for another dictionary elsewhere. No one will quite fill the gap for some time, but hey, the world goes on.

To help you in this process of transition, we have collected a list of alternatives that you can use: 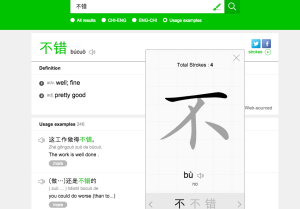 Pros: bigger font and less clutter. After initial absence, the stroke order animation is now back. Line also offers English definitions and a number of example sentences with audio (Chinese).

Cons: compared to its daddy, Nciku, Line offers no traditional character lookup, no Chinese language definitions (and according to the website admins, these functions will not be restored in the future). Nciku offered a bigger database of example sentences with some of them only in Chinese, some of them translated in English – admittedly, the English translations weren’t always the best, but  one could always rely on the Chinese sentences from 现代汉语词典 (XiànDàiHànYǔ CíDiǎn) – Contemporary Chinese Dictionary, the granddaddy of any and all Chinese dictionaries. Line offers only a fraction of those sentences.

Yellow Bridge dictionary offers both free and paid options. If you opt for the free version, you will still get access to a number of handy features. 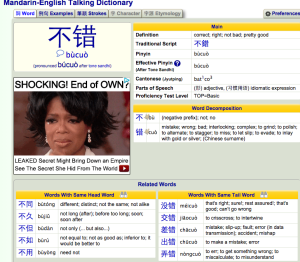 Pro: Along with the English definitions, you can also check the stroke order, traditional script and a small sample of example sentences. My favourite part of this dictionary is the automatic display of related words at the bottom where you can see ‘words with the same head word’ and ‘words with the same tail word’ (in the case of a two-character word lookup).

Cons: The many pop-up windows and ads will slow the site down, in my case, to the point where the site completely froze. The example sentence database is rather small. 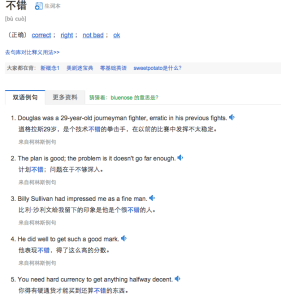 Con: No stroke order, no handwriting recognition. This dictionary is intended for Chinese users and not learners of Chinese – that’s why in the case of example sentences only English audio is given. 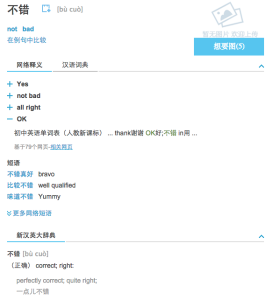 Cons: slower loading speed, no stroke order. This is not a learner’s dictionary and is primarily intended for Chinese users – no grammar information and only scarce information on usage and variants. 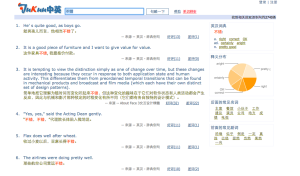 Pros: Jukuu is what its Chinese name suggests -句酷 is a homonym of the original 句库 JùKù or sentence database. Of all the options listed here, it has by far the highest number of example sentences making it an ideal tool for checking all the different usages of a particular word or phrase. I also like the ’preceding’ and ‘following’ word or phrase, listed on the right side of the page. This will give you an insight on which words and phrases are commonly grouped together.

Cons: be wary of the English translations, they are far from being perfect and sometimes even the Chinese sentences are flawed – some of them are obscure others are repeated over and over again. 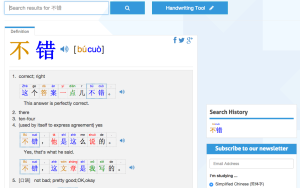 Pros: a newcomer, Tasty Mantou comes in a large and easy-to-read font. The character-by-character sentence break down is great especially for beginners. It enables both simplified and traditional characters lookup, handwriting tool, example sentences with audio.

Cons: not very useful for advanced learners of Chinese.