Australia's Most Popular Chinese Language Course
Learn Anytime, Anywhere with with Our Downloadable Modulesemail me at: support @ learnmandarin.com.au
Pollution, pollution!
Post by Eva

Wear a gas mask and a veil.

Then you can breathe,

Long as you don’t inhale!

China has been stamped as the world’s biggest polluter for a while now – although it’s still far from being number 1 in per capita basis (ranking 78th as of 2013). For a long time the Chinese government denied any responsibility and did not wish to discuss any aspect of pollution and, heaven forbid, ways of solving it. Air pollution, in particular, was nonexistent, and the heavy smog was usually interpreted as mere  fog and dust. Completely disregarded were the PM 2.5, particles, which due to their small size, can penetrate deep into the cardiovascular and respiratory systems. There is also the increasing evidence about the effects on premature births, growth restriction and lung development. 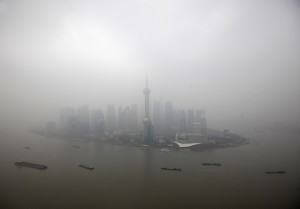 Things changed in 2008 when the US embassy in Beijing began publishing the results of their Air Quality Monitor online. The netizens stirred, some of them shocked, others outraged – the debate begun and the government had to do something about it. Unfortunately, much of the dialogue happening online was, and still is,  dominated by chemical and other companies and retailers wanting to sell their masks, filters and air purifiers. A recent study from the Ohio State University found out that more than 80% users in the online Weibo discussions belonged to government sources and companies, while only 20% belonged to individuals.

In 2013 sixteen of the world’s most polluted cities were located in China. As a response, the Government declared its war on pollution and promised that things will change. They did; at least on paper. The National Action Plan on Air Pollution and Prevention Control (2013-2017) was announced in September 2013, and among other goals aims to control the level of PM. The government has invested more than $227 billion to tackle the pollution, but in these early days, we are still more or less where we were – at the planning stage.

Surprisingly enough a recent report by the World Health Organisation ranks no Chinese cities. Which is strange, considering that many residents of greatly polluted cities, such as Beijing, do not step outside without wearing a surgical mask.

So, how does air pollution affect your daily life, you might ask?

Well, first of all, it’s a bit scary. It’s scary waking up, looking out the window and not seeing the building just across the street, when you know it should be there. It’s strange not seeing the tops of the building. Checking the air quality app is the first thing you do in the morning and you usually check at couple of them – just to make sure. There’s also less people walking outside, the ones that are, are wearing a face-mask. Some of them are wearing really fancy ones, German ones, and you are wondering whether you should be wearing one too. Meanwhile, you are wearing a cheap 3M mask that your boss gave to all the employees.

People tell you no to run, not to breathe to much, and, when possible, stay indoors. It also smells a bit eerie. It’s smokey, bitter and dry. It sounds quieter. Except for the cars that tend to honk even more. It’s devilishly hard to get a taxi and the subway is even more crowded than usually. For your company’s New Year’s party raffle, the main and most craved prize is an air purifier. If you are a good parent, you will buy one for you child too.