As is typical of virtually any dynasty in Chinese history, the dynastic cycle started with two strong emperors, during whose reign the country enjoyed cultural and economic prosperity. Particularly famous is the first Emperor, Kangxi (康熙 KāngXī – 1661–1772), who today is perhaps most known for his role in the creation of the most comprehensive dictionary of Chinese to date, the Kangxi Dictionary (康熙字典 KāngXī ZìDiǎn).

When the empire was headed by strong leaders at realm, the Qing empire became the most extensive in the world with new territories subjugated constantly. Among these are areas which belong to China today, while others cannot deny the influence of Chinese culture, these are Taiwan (台湾 TáiWān), Outer Mongolia (外蒙古 WàiMěngGǔ), Tibet (西藏  XīZàng) and Xinjiang (新疆 XīnJiāng). 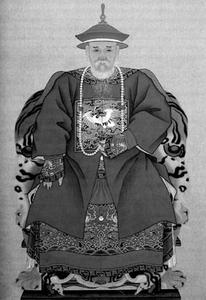 As goes for the later parts of the dynastic cycle, during Qing as well the country became riddled with intrigues and corruption – as always, most prominent in the court. The weakening of the central power brought on two rebellions: the Taping rebellion 太平起义 (TàiPíng QǐYì) and Boxer Rebellion (义和团运动 YìHéTUán YùnDòng). Together with the steady influx of Europeans, who were becoming more and more anxious to trade, the rulers found it ever more difficult to portray a vision of a steady and united front.

Western traders were restricted to dealing only in the port of Guangzhou, or Canton (广州 GuǎngZhōu),  far away from the capital city Beijing. This brought on the ‘Canton system’ of trading, in which business could be done only through a group of selected Chinese businessmen called cohong (公行 GōngHáng) who held the monopoly over the trade of tea and silk.

Even though the terms of trade were rigorously controlled and any breaches severely punished (with no extradition at the time), the number of foreign ships flowing to Canton increased exponentially and by 1833, tea exports were almost 30-times their levels in 1719. Along with tea, silk and porcelain were also popular commodities.

Due to their feeling of superiority from the Chinese side, the Chinese traders refused to buy foreign products in exchange,  which of course meant that the foreign traders were coming at a bit of a loss. Nevertheless, the effect of foreign trade on the Chinese economy was noticeable and had a big impact on the domestic markets thorough the monetary system.

Soon though, the disagreements between China and the foreign parties became more and more prominent and a war of some sort became unavoidable. An example of the clashing of the powers common between China and the West at the time are the two Opium Wars (鸦片战争 YāPiàn ZhànZhēng), we will talk more about them in one of our following posts.