The opium problem started in the late 18th century when the British merchants tried to counterbalance the unfavourable trade with the Chinese side. As we have written already in our previous posts, China at that time believed to be superior to any other country in the world and the same went for its people and its products. The British side, now unwilling to trade anymore with a loss, pushed for the only product that was getting some notice on the Chinese market and that was opium.

After the opium trade was monopolized by the East India Company, the British traders were able to obtain large quantities of opium at a low price from their traders in India, who then shipped it onwards to the buyers in China. The silver obtained for the sale of opium was then used to purchase large quantities of tea which was sold in Europe.

By 1836 the majority of Beijing was in favor of relaxing the opium restraint, but in the last attempt to gain some control over the situation, the emperor Daoguang (道光帝 DàoGuāng Dì), appointed the radical viceroy Lin Zexu (林则徐 Lín ZéXú) who stared his anti-opium campaign. Although the campaign made noticeable progress in controlling the smuggling trade on the Chinese side, the main problem remained the foreign side of the opium trade, which was beyond viceroy Lin’s reach. In a dramatic and desperate move, Lin headed to Guangzhou where he confiscated and destroyed more than 20,000 boxes of opium which belonged to the British merchants. When the Chinese government refused to pay for the damages, the British navy responded. And so commenced the first Opium War which was fought from 1839 to 1842 between China and Britain. 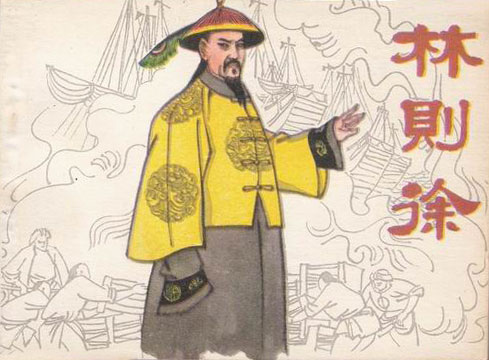 After a long period of stagnation where every effort of modernization and industrialization was frowned upon, the Qing army had no real answer to the powerful British navy. As a result, the Treaty of Nanjing (南京条约 NánJīng TiáoYuē) was signed in 1842, which was to be first in the lines of the unequal treaties signed between the Qing and the foreign forces. The main provisions of the treaty were: cession of Hong Kong to Britain, opening up of five ports exclusively for the purpose of British trade, while the cohong  (the system which allowed trade only through pre-selected Chinese merchants) was abolished and China had to step up and officially recognize Britain as her equal, on top of paying her $21 million in damages. And thus the ‘barbarians’ obtained the same status as the ‘heavenly kingdom’.

The second clash came between the years of 1856 and 1860, and is known as the Second Opium War 第二次鸦片战争 Dì ÈrCì YāPiàn ZhànZhēng, this time fought mainly between China, Britain and France. It all began when the Guangzhou police seized the British ship Arrow, and charged its Chinese crew with piracy and smuggling. A brief display of forces emerged, but this time British, French, Russian and U.S. Diplomats all chipped in, demanding a piece of their pie. The new treaty now allowed for the unrestrained residence of foreign diplomats in Beijing, as well as freedom of Christian missionaries to move around the country and evangelize their faith. Later on also came the loss of tariff autonomy and extraterritoriality, putting China in the status of a half colony.

The end of the now weak and corrupt empire came in 1912, with the abdication of the last Qing emperor, and two millennia of dynastic rule in China came to a close.