Whenever I need to have dealings with a bank in China, I take these necessary measures: empty my bladder, prepare a snack, a decent page-turner, warm socks (in the winter); and just generally brace myself for a long wait. The best time to go there is between 10-11 am; going earlier you’ll risk bumping into the morning crowd that is trying to take care of their business before work; going later, don’t, everyone knows that between 11-2 pm it’s a dead zone with usually just a fraction of employees working while the others are merrily slurping away their noodles somewhere. If you fail to arrive between the golden hour of 10 to 11, then go between 3-5 pm instead. That way, you’ll avoid unnecessarily long queues. 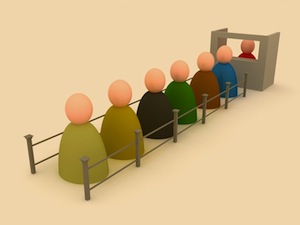 Always, always, no matter how mundane it might seem, bring your passport. As a foreigner, you’ll be required to show your passport for about anything, for example: registering a phone number, checking-in a hostel/hotel, using a computer in the Internet cafe WǎngBa (网吧,  lit. Net Bar); and making any kind of inquiry, change or transaction in your bank.

Yes, I know, it’s safer like that, but sometimes they do exaggerate: just the other day I had to go to China Unicom (a telecom service provider), and they refused to clip my sim card (I just purchased an iPhone which uses a mini/nano card) without the passport, even though I’ve been there just a couple of days before, telling them that I will come back. Yes, before you ask, I did know better, I didn’t bring by passport – I couldn’t since it was in the Entry-Exit Bureau, but they did give me a paper there that was supposed to be just as valid as a passport, and could thus be used in such daily matters as I thought clipping a card was – nay, I was deceived, denied and disappointed. It happens.

Bellow are the names of major Chinese banks and telecom service providers with their pinyin and translation for your convenience: