Australia's Most Popular Chinese Language Course
Learn Anytime, Anywhere with with Our Downloadable Modulesemail me at: support @ learnmandarin.com.au
Shanghai, baby
Post by Eva

My friends and family often ask me – still, after all these years – how could I describe China (this question is second only to: when are you coming back?). I’ve given up a long time ago on nailing down the whole country, but I can give my two cents on describing Shanghai.

Shanghai 上海 (ShàngHǎi) has been my home for the past four years. First as a a student 学生 (XuéShēng), specifically, as a graduate student 研究生 (YánJiūShēng), then as a teacher 老师 (LǎoShī) , translator 翻译 (FānYì) and blogger 博客 (BóKè). I’ve lived in this and that side of the Huangpu river, both 浦西 (PǔXī) and 浦东 (PǔDong), and have travelled up and down all of those subway lines. Still, after all this time and all those miles travelled, I cannot say that I’m an expert.

The main reason for it, perhaps, lies in the fact that I refused to learn Shanghainese. You might think it’s ignorant of me, but let’s face it, Mandarin by itself is taking too much of my brain’s RAM. And, also, I must confess, I’m much more impressed by the languages and dialects spoken up north, where the tones (语调 YǔDiào) are clearer, the consonants harder; while the soft and melodic dialects spoken bellow the Yangtze (such as Shanghainese), for some reason, leave me cold.

I have lived in many a district 区 (Qū), have sat in all the parks 公园 (GōngYuán), and visited many of those new, shiny plazas 广场 (GuǎngChǎng). Still, even by constantly being on the move, it’s hard to catch up. Shanghai is being built (and re-built) everywhere. So it’s not uncommon that one day you’d be driving (being driven) along some old, narrow streets of Shanghai, full of their original  石库门 (Shí Kù Mén) buildings, while just the next day you’d see the merciless 拆 (Chāi, ’tear down’) painted on their walls. 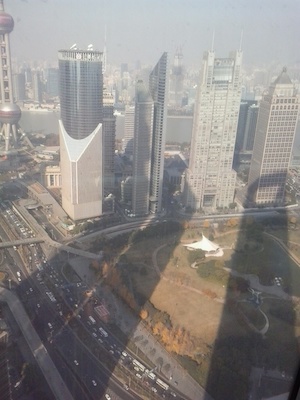 Shanghai is growing up. Here people most definitely don’t live in the houses, instead you live in a 小区 (XiǎoQū), a compound which has it’s own administration, with their own offices and security guards (whose primary role is, it seems, to point out the growing number of parking spaces that are available in front of every gate of said compound), and then there is the 物业 (WùYè) – the maintenance guys, ready to take your call and to eventually come by and fix that leaking toilet 马桶 (MǎTǒng). Oh, don’t let me forget – how could I – the constant droning, drilling, and, at times, almost deafening noises of the upstairs apartment being fixed, ad nauseam. You escape, momentarily, by walking to your friend’s house (compound), only to be greeted by the same noise over there.

This is Shanghai. It’s big and noisy, but there’s always something to be done and always something to be seen. 小笼包 (XiǎoLóngBāo) dumplings to be eaten, or a new exotic fruit to be tried – although I still haven’t gotten over the experience of eating durian (榴莲 LiúLián); either you love it, or hate it, passionately.