Australia's Most Popular Chinese Language Course
Learn Anytime, Anywhere with with Our Downloadable Modulesemail me at: support @ learnmandarin.com.au
Some Chinese Four-Character Idioms
Post by admin 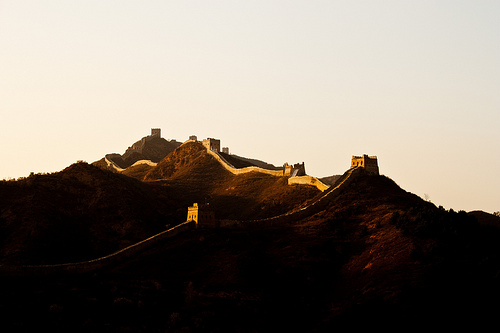 Everybody loves a good story whether it is a book, movie, TV show or just something a friend shared with you.  At times we like them without even knowing it.  China has such a rich history and with that history comes a plethora of literature and historical events to draw from and some of these stories are told in just four characters.  These are called “成语 (cheng2yu3)”, meaning four-character idioms.  Now these idioms do not actually tell the story, but they reference the story within four characters so the moral of the story is said without having to go through the whole event.  Here we are going to look at a few four-character idioms and their meanings.

This idiom is one of the first ones taught in many Chinese classes and it is classic “自相矛盾 (zi4xiang1mao2dun4).”  “矛 (mao2)” means spear and “盾 (dun4)” means shield.  The story goes that a weapon salesman was selling spears and shields.  He would shout, “Come look!  My shield is so strong that no spear can pierce it.”  Then after trying to sell his shield he went to promoting his spear saying, “Come look! My spear is so sharp that it can pierce any shield.”  An older man heard both sales pitches and confronted the salesman saying, “If your shield is so strong no spear can pierce it and your shield spear is so sharp it can pierce any shield; what happens if your use your spear against your shield?” embarrassing the salesman.  From this we can see how the meaning of 自相矛盾 is “self-contradiction”.

Next is an idiom from the epic three kingdoms period.  It is “三顾茅庐 (san1gu4mao2lu2).”  Liu Bei wanted strategic advice during a war and knew of a wise hermit who lived on a mountain named Zhu Ge Liang.  Liu Bei had to go up the mountain to persuade Zhu Ge Liang to help him.  The first time he want up, Zhu Ge Liang refused.  The second time was not any better, but the third time Zhu  Ge Liang agreed because of the persistence of Liu Bei.  The meaning is that persistence pays off just like Liu Bei’s persistence paid off in persuading the wise man Zhu Ge Liang to help him win battles.  So saying, ”三顾茅庐 (san1gu4mao2lu2)”, is to encourage the listener to be persistent to achieve success in an endeavor.

Now this idiom is from the Qin Han period of Chinese history.  It is “四面楚歌 (si4mian4chu3ge1)”   Xiang Yu was king, but did not believe in obtaining knowledge even saying about writing that, “Being able to write your name is enough.”  He was a great warrior, but made many mistakes as far as running his army and his country.  Due to his incompetence, many of his men defected to Liu Bang’s side.  Xiang Yu continuously lost men to Liu Bang.  Later when they were fighting a battle Xiang Yu was surrounded by Liu Bang’s men.  Since many of his men were Xiang Yu’s men before they sang his people’s songs while he was surrounded and was extremely sad.  He decided to make a run for it losing all his men.  Finally, he killed himself.  四面楚歌 is best likened to “between a rock in a hard place.”  It is the description of when Xiang Yu was surrounded and heard his people’s  song on all four sides having no recourse and no place to go.

This one involves the first emperor of China, Qin Shihuang.  Sometimes Qin Shihuang would go into the country to check up on things.  He took several trips like this and on the last one he brought his youngest son named, Hu Hai.  During the trip Qin Shihuang became very sick and knew he would die so he wrote a letter as to who would be emperor when he died to send another son Fu Su.  Qin Shihuang died on the trip and so his minister kept it secret putting him in a coffin and going straight home.  The minister’s name was Zhao Gao.  Zhao Gao and another companion had a plan to make Hu Hai a puppet king so they wrote a fake letter making Hu Hai king.  After Hu Hai was made king, Hu Hai and Zhao Gao secured the throne by killing Hu Hai’s brothers and the ministers of the court who opposed them.  Zhao Gao became Hu Hai’s chief advisor and only he could see the king.  Later Zhao Gao wanted to see which ministers of the court he had influence over so Zhao Gao presented a mule to the emperor in front of the ministers and said it was a horse.  Hu Hai said, “You are wrong, how can you say a mule is a horse?”  Then he asked the other ministers of the court, “Is this a mule or a horse?”  Most of the minister’s were afraid of Zhao Gao and said the mule was a horse and only a few would dare say it was actually a mule.  After this event Zhao Gao had all those who said the mule was a mule killed.  Some time after this event Zhao Gao killed Hu Hai, but was promptly killed himself as well. “指鹿为马 (zhi3lu4wei2ma3)”, literally means to point at a mule and say it is a horse.  Now it is used to say a couple of things:  1) Is to lie to customers 2) is to purposely say what is wrong is right and what is right is wrong like the ministers of the court in the story.

The emperor, Liu Huiwang saw a man named Paoding cutting beef.  Paoding’s movement was actually very beautiful like dancing to music.  He cut the meat with such ease that it inspired a reaction from Liu Hiuwang.  He said, “Wow, you cut beef at an extremely high level.”  Then Paoding boasted about his craft saying he has years of experience having studied the structure of cattle knowing where every bone and joint are.  “I know exactly where the space is to cut”, he said.  Then he went on about his knife saying, “Your average butcher uses up one knife a month and a good butcher uses one knife per year.  I have been using the same knife for 19 years and it is still as sharp as when it came off of the sharpening stone.”  One four-character idiom that comes from this little anecdote is “游刃有余 (you2ren4you3yu2)”, which means to do a job with great skill due to experience and study and the more literal “to handle a cleaver with skill.”  So if someone has so much experience that their job is easy for them and done with skill this idiom applies.

Four-character idioms are a great example of communicating a great deal of information within the confines of just a few strokes of the pen.  These idioms can save paragraphs of writing or speaking.  There are hundreds of these idioms so ask your Chinese friends or teachers which ones are the most useful and understood.  History, literature and communication all meet in these idioms. Once you start using these correctly you will be impressing Mandarin speakers with your deep knowledge of Chinese language, history and literature in no time.