Australia's Most Popular Chinese Language Course
Learn Anytime, Anywhere with with Our Downloadable Modulesemail me at: support @ learnmandarin.com.au
The Faces of China: The Goddess
Post by Eva

Meet the famous actress, model (模特 MóTè), host – the goddess,  林志玲 (Lín ZhìLíng). Chances are that if a tall, slender, shy-looking beauty is staring at you from a nearby jumbo poster, you are most probably facing Ling Chi-ling. Born in Taiwan, Taibei in 1974, Chi-ling was later on educated in Toronto (多伦多 DuōLúnDuō), where she obtained a double degree in Economics and Arts. After graduating, she returned back to Taiwan, where she wanted to pursue a career in fine arts. After seeking employment in Taiwan’s biggest galleries she was continuously rejected for lacking a Master’s Degree (研究生  YánJiūShēng).

Disappointed, Chi-ling quickly found herself on the other side of the lens, by pursuing a career in modelling (模特生涯 MóTè ShēngYá). The modelling gigs gave the slender, 175 cm tall woman a steady source of income, but her fame came long after it. In 2002 Chi-ling shot a commercial for a Hong Kong cosmetics agency, which caused a lot of discussion between the netizens who found her looks unforgettable. Almost over night  Chi-ling became the talk of the town (一夜红 Yī Yè Hóng – lit. ‘Red in one night), and soon afterwards the talk of Taiwan and Mainland China as well.

In 2003 Chi-Ling became the First Model of Taiwan (台湾第一名模 TáiWān Dì Yī Míng MóTè), becoming the undisputed winner over the former No. 1, Stephanie (萧蔷 Xiāo Qiáng). No long after, she became the First Beauty of China “台湾第一美女” (TáiWān Dì Yī MěiNǜ). Her fans were mesmerized by her signature (招牌 ZhāoPai) ‘sweet smile’ 甜甜微笑 (Tián Tián WēiXiào). Her fame puzzled many, especially the fact that she became famous ‘so late’ – nearing thirties. Modelling is undoubtedly a career for the youngest, and in those circles those who hit 30 are described as ‘tofu dregs’ 豆腐渣 (DòuFūZhā) – not leaving a lot to the imagination. Many still wonder about her  rise to fame, calling it  ‘Lin Chi-ling phenomenon’ 林志玲現象 (Lín ZhìLíng XiànXiàng).

From then on, Chi-ling started appearing in many commercials of the biggest brands (名牌广告 MíngPái GuǎngGào) in the world, while, at the same time,  she also launched her career as an actress.  Lin’s popularity grew throughout the rest of 2004, as she began modelling in Hong Kong and Mainland China, and also began doing Japanese advertisements in 2005. Later that year she had an accident while shooting a commercial for Procter & Gamble; she fell of a horse which resulted in several broken ribs and has become the eternal source for numerous rumours and speculations about whether she had, or not, undergone cosmetic surgeries during her career.

She became the official spokesperson of China Airlines (中华航空 ZhōngHuá HángKōng) and Longiness in 2006 – and remains in that position today. In 2007-2008, Chi-ling, along with other big names of Chinese movie industry, started in the blockbuster Red Cliff (赤壁 Chì Bì). In 2011 she sang along with Jay Chou in the Spring Festival Gala (春节晚会  ChūnJié WǎnHuì) performance, where they performed a duo  兰亭序 (Lán Tíng Xù)- well, hers was more of a recital. Why? Well, of course she is beautiful, but on top of that, her voice is considered angelically sweet (too sweet, abundantly sweet, her critics would say, even 很嗲 Hěn Diǎ – childish. But, not to worry, for all of her fans out there, check out the recent Autonavi app where Chi-ling’s sweet voice will be the one safely guiding you through the streets of China. 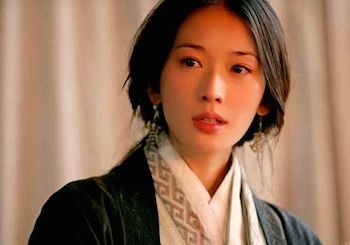 With a net worth of $7.93 Million, her other most notable successes are: she is the first model to appear on a Chinese stamp (邮票 YóuPiào) and her involvement in several charitable organizations including Procter & Gamble Breast Cancer Prevention Association and World Vision AIDS Orphan Project.