Australia's Most Popular Chinese Language Course
Learn Anytime, Anywhere with with Our Downloadable Modulesemail me at: support @ learnmandarin.com.au
The world revolves around China
Post by Eva

1. Everything is written with (tiny) Chinese characters

2. It’s Asia-centered with Asia placed in the middle of the map, Africa and Europe on the left and the Americas on the right side of the map. 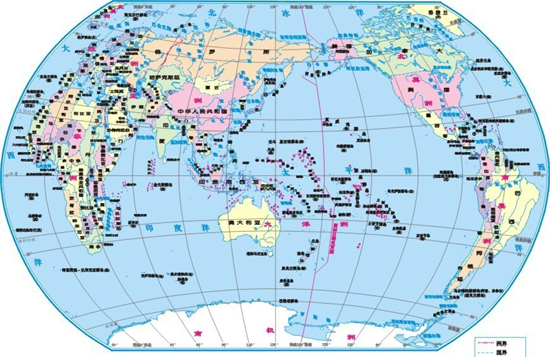 So, China is placed in the middle of the map. Rather appropriate for a country named Middle Kingdom 中国 (ZhōngGuó). This notion  stems from the historic fact that China once dominated that part of the world (kind of like today) and was considered the most technologically and culturally advanced empire on the planet Earth.

So China was massive and rich and other countries were supposed to come to the Chinese court (if the gracious Emperor so granted) bringing presents and sending their most important leaders to kneel before the Emperor. This action of kowtowing  (叩头 KòuTóu) actually involves kneeling so low to the ground that one’s forehead is able to touch it. It was necessary to do it to show respect and submission, and of course, things got complicated with the arrival of western embassies – many refused to bow, since that would imply that their own king was inferior to the Chinese emperor.

Interestingly enough, in email speak, kowtow is represented by the letters Orz, which form a stick figure bowing.

Going back to the geography and geographic names, the Chinese names for the four Western countries US, Germany, United Kingdom (well, England, actually) and France are special: they only consist of two characters, the first being a transliteration + (positive) meaning and the second being the character 国 Guó, which means ‘country’. Judging from the characters used for the first part of the name, the Chinese were in that stage rather enamoured with them. You’ll see what I mean:

Most of other countries consist of 3-5 syllables and are mere transliterations. For example:

The seven continents in Chinese all have the word 洲  (Zhōu) in common, which means ‘continent’:

The Chinese word for ‘map’ is 地图 DìTú, lit. Earth + map. Maps are flat objects, so they go with the measure word 张 (Zhāng). For instance: