Australia's Most Popular Chinese Language Course
Learn Anytime, Anywhere with with Our Downloadable Modulesemail me at: support @ learnmandarin.com.au
Top 10! Tools for learning characters and vocabulary
Post by Eva

Our students often ask us: what are some good, free resources for studying Chinese?

We are here to answer those questions!

These days, there are plenty of  resources for studying Chinese available, some better than others, some paid, some for free. To make things easier for you, we have broken them down into separate categories, and we’ve added a short introduction. We focused only on resources that are available for free.

Let us know if you have any other questions or suggestions.

Studying characters is a lifelong process, I’m afraid. But why not make it a more enjoyable, or, at least, slightly more organised process with some of these:

Whenever someone mentions studying vocabulary, I immediately think of Anki, the best flashcard program out there. Anki uses the concept of spaced repetition which revolves around the observation that: ‘we tend to remember things more effectively if we spread reviews out over time, instead of studying multiple times in one session’.  And that’s precisely what the software does: it schedules your future sessions based on the answers you feed it. 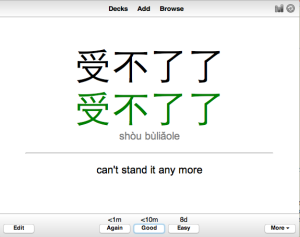 Anki is free and available to download on virtually any platform. You can use it to add vocabulary from your current lessons or download one of the ready-made decks that are available for free online (why not start with frequency lists, or HSK study lists?).

I recommend using Anki with any sort of material, textbooks, frequency lists, podcasts, books, but make sure not to overwhelm yourself. Set your decks to show maximum 5-10 new cards per day and make sure you finish all the reviews that are scheduled for you.

2. The 100 most common Chinese radicals

As I have already mentioned, there are numerous decks available for download from Anki’s website. If you are a beginner or elementary student, why not start with 100 of the most common Chinese radicals? (a radical is the parts of a character that carries its meaning, for example 口  can be a standalone character to mean ‘mouth’, but it can also be a radical in other characters, such as 语言 ‘language’). 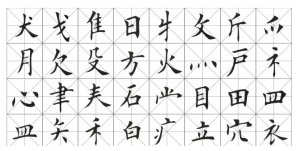 This list was compiled by Olle Linge of Hacking Chinese and it features 100 most commonly used radicals, selected from the pool of 2000 most commonly characters. The deck is very comprehensive and features (as explained by the author):

If you don’t want to use it with Anki, you can download it in pdf format from Hacking Chinese website here.

3. The most common Chinese characters (3000) – ordered by their frequency

Another vocabulary list that you can use with Anki, or without, is Patrick Zein’s legendary list of ‘3000 most frequently used characters in modern, simplified, mainland Chinese (with references to traditional/full forms and words in which the characters are used)’. I say legendary, because the list was made back in 2007 – which is a long time in internet terms – but remains to be one of the most used and referenced Chinese frequency lists.

As a student of Chinese, I am sure you have to answer this question pretty often: “So, how many characters do you know? Well, now you know! 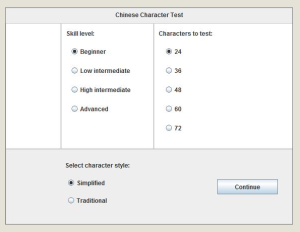 ‘The Chinese Character Test uses a statistical algorithm to help you estimate the number of characters you already know, making it easy to track your progress in learning the language. After you’ve taken the test, you can also compare your score to the average scores for each level of study by submitting your score using the form at the bottom of this page.’

MDBG is a very comprehensive Chinese-English dictionary suitable especially for in-depth character study. The dictionary allows you to search by English, pinyin, or Chinese characters (handwriting tool available). You can also input the whole sentence and MDBG will do the work of breaking it down into words.

Besides the definition, the results also come with pinyin pronunciation (with an audio file). You can check the stroke order and direction for each character, as well as radicals contained in a character, and it displays both simplified and traditional variants. No example sentences are provided. 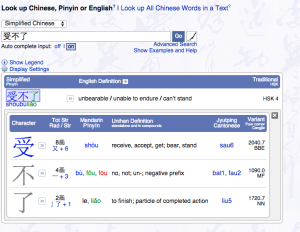 We particularly like the function of radical lookup, which displays a list of radicals and also each of the words within which that radical appears.

Is another Chinese-English dictionary, that provides etymology of each character. This will give you an insight into where the character comes from, what its constituent parts are and the origins of its meaning. Zhongwen is especially popular with students that study traditional script; although simplified variants have been added, the process of simplification is not always explained.

We particularly enjoy its tree structure. 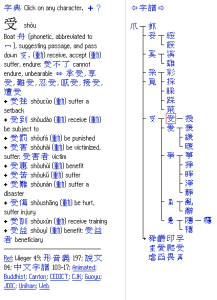 Hanzicraft (hanzi means ‘Chinese character) is an online dictionary that is good for thorough character research since it tries to dig out as much information as possible. Besides the character, you’ll also see how a character is broken down, it’s radicals and strokes. Further on, you will also see frequency lists – in which other words does this character tend to appear, in order of frequency (mined from more than 4 million Weibo posts). 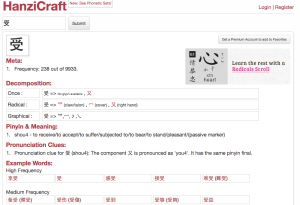 Note: the premium account allows you to lookup several characters at the same time.

Nuli started out with tweets that were tailored to your Chinese level, but has now evolved into a free vocabulary acquisition machine. Signing up is free, from then on you can head out to the learn page where you can study new characters with English translation, words broken into characters and example sentences. You can also tests yourself by translating the meaning of the new word in a sentence. You can read a more detailed guide on how to use Nuli here.

Horizontal hanzi  is great for differentiating between similar looking characters. Start by ‘most popular’ or click ‘random’ if you feel lucky. 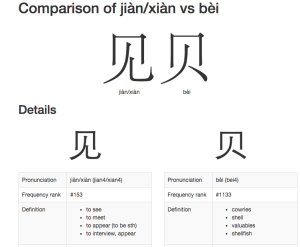