Established back in 2006, Lang-8 today boasts more than 750,000 users from 190 different countries around the world. The concept of Lang-8 is simple: new users register on the website and provide the information on which language they want to learn or are currently learning (target language) and which is their native language. Once their account is opened, the users can then start posting new content in the language they are learning. These can be short stories, diary entries or just simple sentences. Their posts are then shown to the native speakers of the target language who then proceed to write corrections and suggestions on how to change the original entry.

For corrections, users are rewarded points. The more points you have, the more popular you are and the more likely it is that you will have your posts corrected. That means, for example, if I am a native speaker of English and want to learn Chinese, I will get points by reviewing and correcting the content that was written in English. If I accumulate lots of points it will be very likely that other users (perhaps the same people that I helped) will then check my content.

Besides correcting content you can also add friends. The more friends you have (ideally speakers of your target language), the more likely it is again that your content will be corrected.

All this for free (premium subscription gives you the option of downloading pdf files and ‘priority display which increases the likelihood of receiving a correction’).

Like Anki, Skritter also revolves around the idea of spaced repetition, which means that the practice is targeted with an emphasis on the material you are less familiar with. Of all the resources that we have listed so far, Skritter is also the only one that allows you to write characters on the screen and offers you immediate feedback for each stroke. For example, if your stroke order is wrong, or if the direction is incorrect, Skritter will let you know. If you’re unsure of how to write a particular character, Skritter will demonstrate it for you. 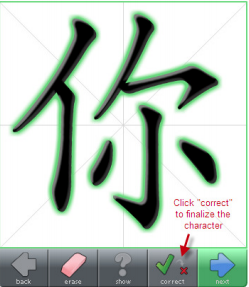 Skritter will test you on your tone recognition, pinyin or definition. It also has a huge selection of ready-made lists that you can choose from, but you can also make your own (currently, they offer 263+ textbooks and 3000+ user-created pre-made lists on many topics).

With handwriting recognition, personal progress statistics, tone practice, custom mnemonics, iPhone app, example sentences, list creator and more, Skritter is a very powerful tool for learning Chinese. Unfortunately, it’s not for free, and you’ll have to pay around $15/month to access it fully.

If you’ve ever wondered how I am able to write things like Nǐ Hǎo (instead of Ni3 Hao3), it’s not super powers, it’s simply a text editor that enables me to convert the numbers into the right tones. One of such editors in Pinyin editor. Check it out!

Similar to Pinyin editor, but instead of having to write the pinyin with numbers first then click and wait for the converted version, Lexilogos Pinyin conversion display both of them at the same time. Type the word Ni3 in the left box and Nǐ will be displayed simultaneously in the right box. If you ever find that you have to do the reverse process (Nǐ -> Ni3) you can do it here as well. 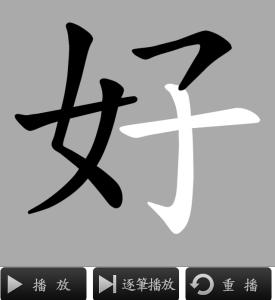 consists of stroke-order animations of 4,080 characters established as frequently-used (by Taiwan’s Ministry of Education). There are five ways to search for characters: by character, stroke number, radical, Bopomofo symbols (bopomofo is the system of phonetic notation for the transcription of Mandarin used in Taiwan) and pinyin. 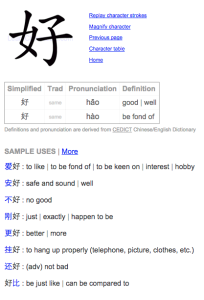 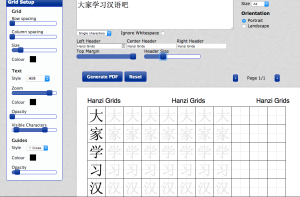 Hanzi (Chinese characters) Grid is exactly what its name promises to be. It is a user-made exercise sheet for practicing Chinese characters. You can choose between different fonts (even some styles of calligraphy), backgrounds, headers (for a one-time fee of AUD 10), spacing and, of course, different scripts (simplified and traditional). After registering the users can download the grids for free in pdf format. 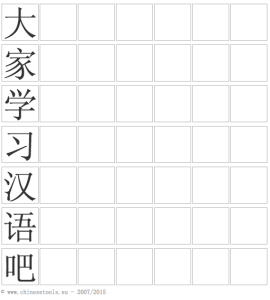 Is similar to Hanzi Grid, but with less functions and less options, but is otherwise still a neat and easy way to generate custom-made practice sheets. All you have to do is input the characters you want into the first box and generate the sheet. There’s no option of saving it as pdf, but you can, of course, print it.

9. The art of punctuation in Chinese

You must have noticed that Chinese punctuation is different from the standard punctuation we use in Western languages, for example. The period, or the full-stop is a little round circle instead of a tiny black dot, the comma seems to be looking the other way and takes up too much space. To find out more about punctuation in Chinese and how to use it correctly check this comprehensive blog post.