Australia's Most Popular Chinese Language Course
Learn Anytime, Anywhere with with Our Downloadable Modulesemail me at: support @ learnmandarin.com.au
Tortoises VS Turtles in Chinese Culture
Post by Eva

I have seen a fair share or tortoises while staying in China. In jade, bronze or stone, they are featured everywhere, and most importantly, respected. My first encounter with a tortoise of such kind ocurred during my first adventure into the Chinese speaking world, when during my attempt to climb on a gigantic stone statue of one, our tiny, yet super strict Lin Laoshi (老师) instructed me not to do so. It’s bad luck, she said, and in Chinese culture tortoises are respected for their longevity. At that said time I was in Taiwan, where people tend to be more traditional and more focused on the customs, culture and history, but I was curious to know why the tortoise, or turtle for that matter, seems to be an ongoing theme throughout Chinese culture. 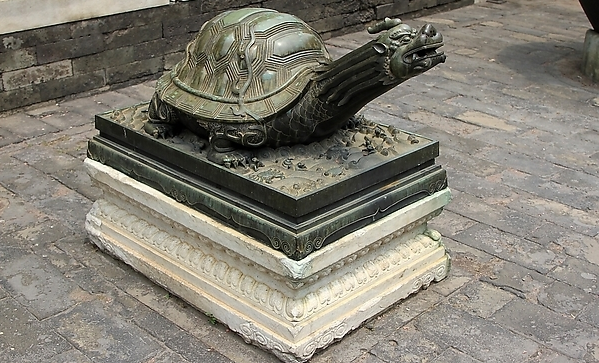 Now, before we get any further, what is the difference between a turtle and a tortoise? Simply speaking, the turtles are the one that live in the water (and are featured in Finding Nemo), while tortoises are land dwelling. Another crucial difference is their average lifespan: a turtle lives between 20-40 years, while tortoises are said to live to more than one hundred years.

Why all the fuss around tortoises? Well, according to Chinese mythology tortoises themselves were responsible for holding up the Island of the Immortals, a mythological island that was supposed to be somewhere in the Eastern sea, also home of the immortals. I don’t know about you, but this kind of sounds like Terry Pratchett.

According to some other accounts – yes, these things were written way way back ago, so no one is entirely sure on what was going on over there – tortoise was kind of like the co-founder of the universe and was supposed to be there with Pangu, when the universe was created.

Who is Pangu (盘古 PánGǔ), you might ask. Although, I am sure a separate post will be dedicated to him (or was it a she?) in the future, let’s just say that he (or she) was the child of Yin (阴 Yīn) and Yang (阳Yáng) forces, hatched from the great cosmic egg of chaos in the beginning of time. Wow.

Tortoises are also one of the ‘fabulous four’, the four celestial creatures each supposed to protect one side of the compass.The others being white tiger, phoenix and dragon.

For all these reasons and more, tortoise are kept in tanks in Buddhist temples and feeding them is supposed to bring you good luck – I don’t know who exactly came up with this, but judging by the average number of tourists in your typical tourist destination in China, these poor creatures must be suffering from type II diabetes by now.

Tortoise shells also carried the first samples of Chinese writing, when long long time ago in Shang dynasty, they were used for divination purposes. Some even believe that the actual writing system was made from imitating the series of patterns that appear on tortoise’s shell. Coincidentally, the traditional character for tortoise 龜 (16 strokes) is impossible to write, although you can, of course, go with the simplified version of 乌 (7 strokes).