My first encounter with traditional Chinese medicine was several years ago when I first arrived to China. Back then, I was enrolled in an intensive Chinese language course, and one day one of my teachers, my favorite one, Ms. Liu, showed up to school with the back of her neck all purple and angry looking. I asked her what was the matter (did a vicious, but poor-sighted vampire attack her, was my first question – and that was before all the Twilight fuss) and she told me that she had been to the doctor,  because she was feeling poorly. “Then why didn’t the doctor do anything about it?”,  I enquired further. She told me that the mark was made by the doctor himself, a venerable Shifu (师傅 ShīFu). To soothe my baffled expression she went on to say that the Shifu had used a cow horn to scrape her neck in order to scrape-away her cold. Needless to say, that didn’t help much in clearing the matters for me.

This procedure is called 刮痧 GuāShā. Does it work? Depends on who you ask. GuāShā is used for minor illnesses such as a colds, sore throats, headaches, as well as some chronic pain (which, they say, might occur due to the blocked Qi, or energy flow); GuāShā is one of the treatments that will help you with the pain (or at least distract you with another pain).

A similar form of treatment is 拔罐 Bá Guàn, or cupping, where small glasses are applied to your back (usually pre-heated or swabbed with alcohol to create suction), sucking the surface layer of your skin into the cup. After ten minutes or so, the cups are removed, resulting in dark, purple circles across your back (and yes, they hurt too).  The purpose of this treatment is to unblock the flow of energy and blood, relieving tension and pain, and also curing indigestion, insomnia and coughing. 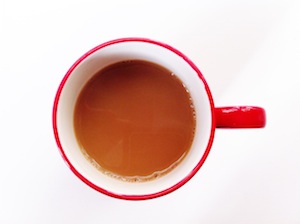 I’ve tried it a couple of times, and it’s hard to say whether it worked or not.  The pain was there for a couple of days (I couldn’t lie on my back, couldn’t bear to wear a backpack or anything). And afterwards?  It’s hard to say for sure, but maybe afterwards I felt lighter, more relaxed. If nothing else, I’ve tried it, and now, at least I have some nice, scary photos to share from the time that I was attacked by a poor-sighted vampire with some pretty round lips.