Australia's Most Popular Chinese Language Course
Learn Anytime, Anywhere with with Our Downloadable Modulesemail me at: support @ learnmandarin.com.au
Waiter, a cup of Kafei please!
Post by Eva

Languages have always influenced each other and this influence is most notable in vocabulary. They frequently borrow words from each other and with time we might even forget where they original word came from in the first place. English language, especially, is prone to absorption of new words whether from Japanese like ‘samuari’, Spanish ‘taco’, Arabic ‘coffee’ or Hindi ‘shampoo’.

Ever since the first contact China had with the Western world in Qing dynasty, the first borrowings started to emerge, such as the unfortunate ‘opium’. In the last three decades the influence of English language has been stronger and stronger with the gradually increasing role of English in the daily lives of Chinese speakers.

These days knowing English is not only cool, it’s also a status symbol – good usage, and most importantly, good pronunciation will open doors for you career-wise, to the effect that many Chinese companies now prefer to employ fluent English speakers, no matter what background they come from otherwise.

This led on to the creation of ‘international’ kindergartens (sometimes not much more than the name itself is ‘international’), high schools, language programmes, exchanges, and just schoolchildren generally being encouraged to acquire a good level of English; the sooner the better.

There is, of course, also the influence of culture, especially American one. Hollywood products are being adored by many a young Chinese nowadays. TV Shows, movies, brands and shops are worshipped and fashion trends observed to the toe.

Ok, but going back to the language itself, Mandarin Chinese, as we have said, is far from being immune to the influence of English language. This was the reason behind the rapid introduction of many foreign sounding words, especially those connected to the areas of technology, media and international politics.

The process by which new Chinese words are created with pronunciation similar tot the original English syllable or word is called transliteration. It’s important to understand that while those particular characters chosen to represent the represent the English sound,  make otherwise (except for the sound) no sense to Chinese readers.

Luckily, the characters and sounds used to represent transliterated words tend to repeat.

Let’s look at the names of countries as written and pronounced in Chinese, and observe the repetition of characters 加 and 大: 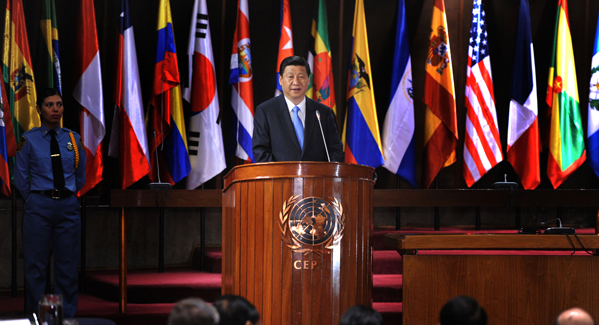 Among others, there’s also nouns for different types of food: