Australia's Most Popular Chinese Language Course
Learn Anytime, Anywhere with with Our Downloadable Modulesemail me at: support @ learnmandarin.com.au
What is Daosim (Taoism) anyways?
Post by Eva

Daoism is among five religions recognized by the People’s Republic of China (along with Buddhism, Islam, Catholicism and Protestantism) and is presently managed by the National Daoist Association.

At the core of Dao is 道 (Dào). The interpretations of 道 are many, but it can be explained as the ‘way’ or ‘path’, which is the core concept behind the philosophy of Daoism. ‘The way’ is the order of things, the life force and the driving power in nature as well as the harmony of the universe. A Daoist master 道士 (DàoShi) is someone who is able to tap into these interconnected forces.

It is believed that Daosim has been founded by one single teacher, 老子 (LǎoZǐ) who lived around the same time as Confucius 孔子 (KǒngZǐ) – notice the character 子 (Zǐ) which stands for ‘master’. Although not much is known about Laozi – and some others believe he was merely a legend, a mythical creature even – he is famous for his work 道德经 (DàoDéJīng), which to this day is found in numerous interpretations and translations and is considered a classic Daoist text. Translated as ‘The Way and Its Power’, or ‘The Classic of the Virtue of the Dao’ (you know what I mean by countless interpretations now?) it consists of 81 brief sections, containing no more than five thousand characters in total – giving it another name ‘Laozi’s Five Thousand Words’. It was meant as a handbook for the rulers who should impose no restrictions or prohibitions on their subjects. This sage-ruler was to be wise, wanting to bring peace and harmony to his state, ‘acting by not acting’, that is, not micromanaging, but simply following the rules of the nature. According to Laozi ‘not acting’ does not mean doing nothing at all, but acting naturally, without resistance to nature. 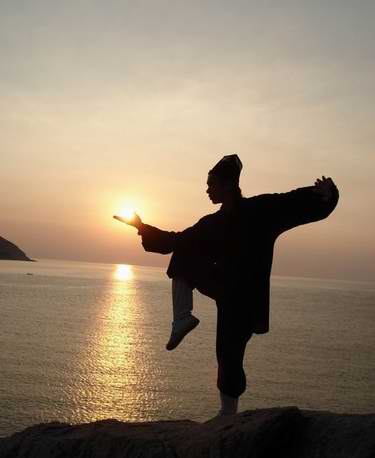 Daosim itself is otherwise a collection of ideas and believes and is considered to be a mixture of religion and philosophy. Another important figure in Daoism was 庄子 (ZhuāngZǐ) – yet another master – who is considered to be one of the greatest Daoist writers and has written ‘The Book of Zhuangzi’, which addresses the proper way to approach ethical disputes.

If Dao is the way, 德 (Dé) is the power, or virtue, to transform something. Another important concept in Daoism is 气 (Qì) , the vital energy or life force, which to this day is the core concept behind the Traditional Chinese Medicine, as well as some forms of martial art, like taichi (太极拳 TàiJíQuán).

Daoism has being shaping Chinese life for more than two thousand years and it permeates through Chinese culture to this day: it is considered less rigid than the official Confucianism and has been seen as a link between the Confucian and folk traditions. In popular, folk culture, Dao is seen as an attainment of immortality. This is achieved via alchemy, dietary control, gymnastics and good deeds. This Dao was practiced (and is practiced today) in local communities, headed by the Dao master and is characterized by fasting sessions and banquets. The purpose of this sessions was to clean oneself and purge oneself of sin, with both men and women participating (unseen in either Buddhist or Confucian traditions) and could last for days.